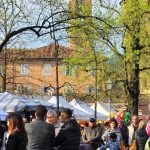 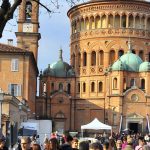 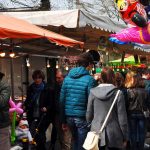 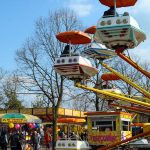 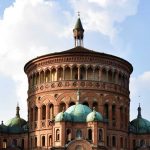 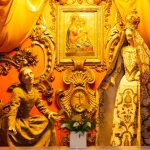 In the past village festivals followed a set calendar dictated by the spring season and confirmed the importance to the agricultural community of two fundamental principles, continuity and rules. Renewal of life was initiated by granting young people the possibility to meet and form new couples.  Moreover, the celebration of a patron saint or a miraculous event implicitly taught the collective conscience about the rules and duties with which it was important to comply in order to avoid a severe crisis in the community.
This context is illustrated perfectly by the Santa Maria della Croce Festival or fair, known by the people of Crema as ‘la fèra’. 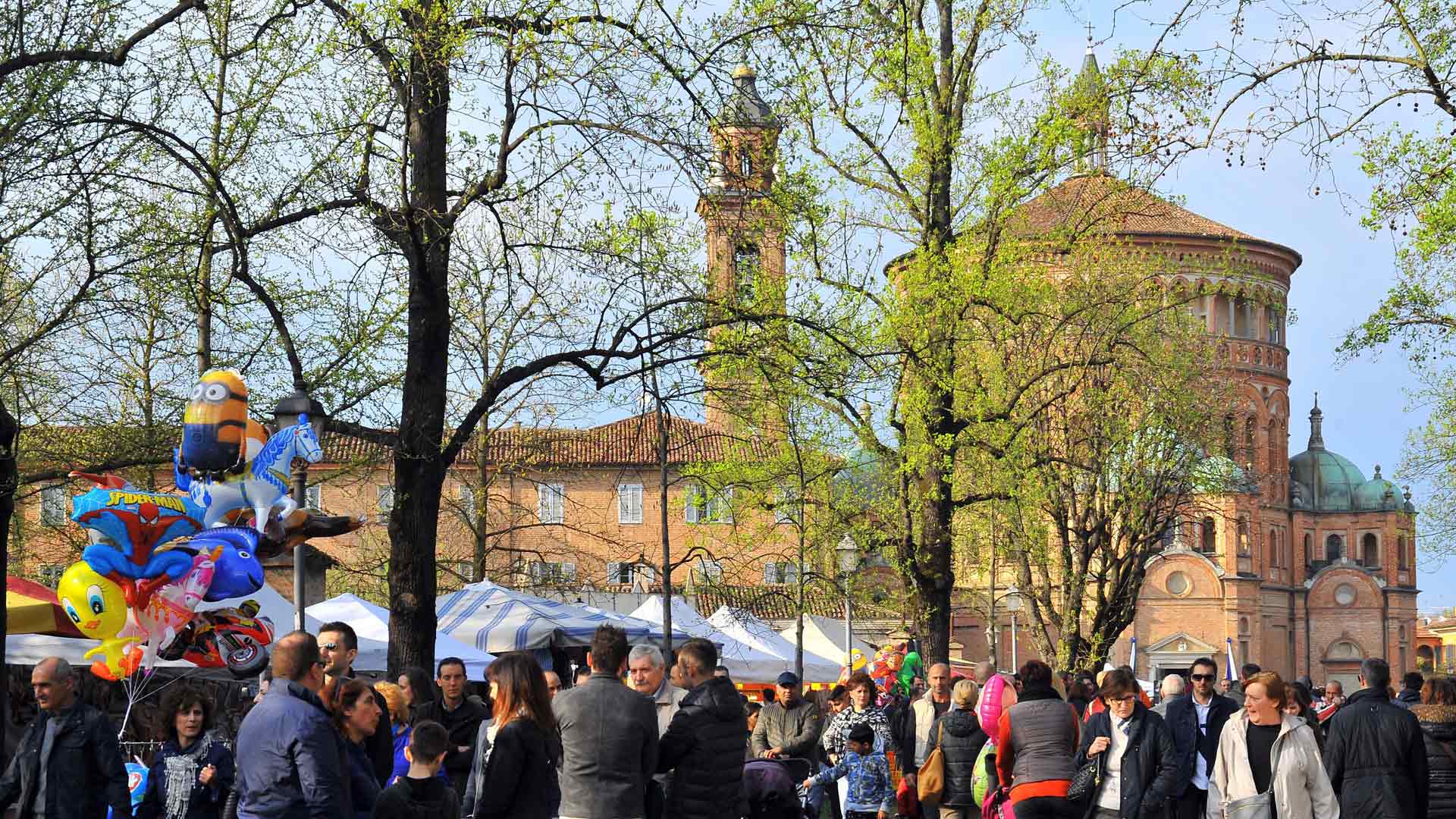 The festival is a well established local tradition and has been held annually for more than three centuries. Traditionally held on March 25th every year, in recent times it has been moved to the weekend either immediately before or after that date to ensure greater attendance. The festival was established in 1665 outside the town walls in order to encourage the exchange of goods, improve traffic and promote trade or, as written in the official document of the Venetian nobleman ‘doge’ Domenico Contarini, who authorized it for the first time, “in order that, by this convenience, the very loyal subjects can receive, with the contribution of foreign people, and others, some relief in dealing flax, edible things and handicrafts, so increasing the public income”. 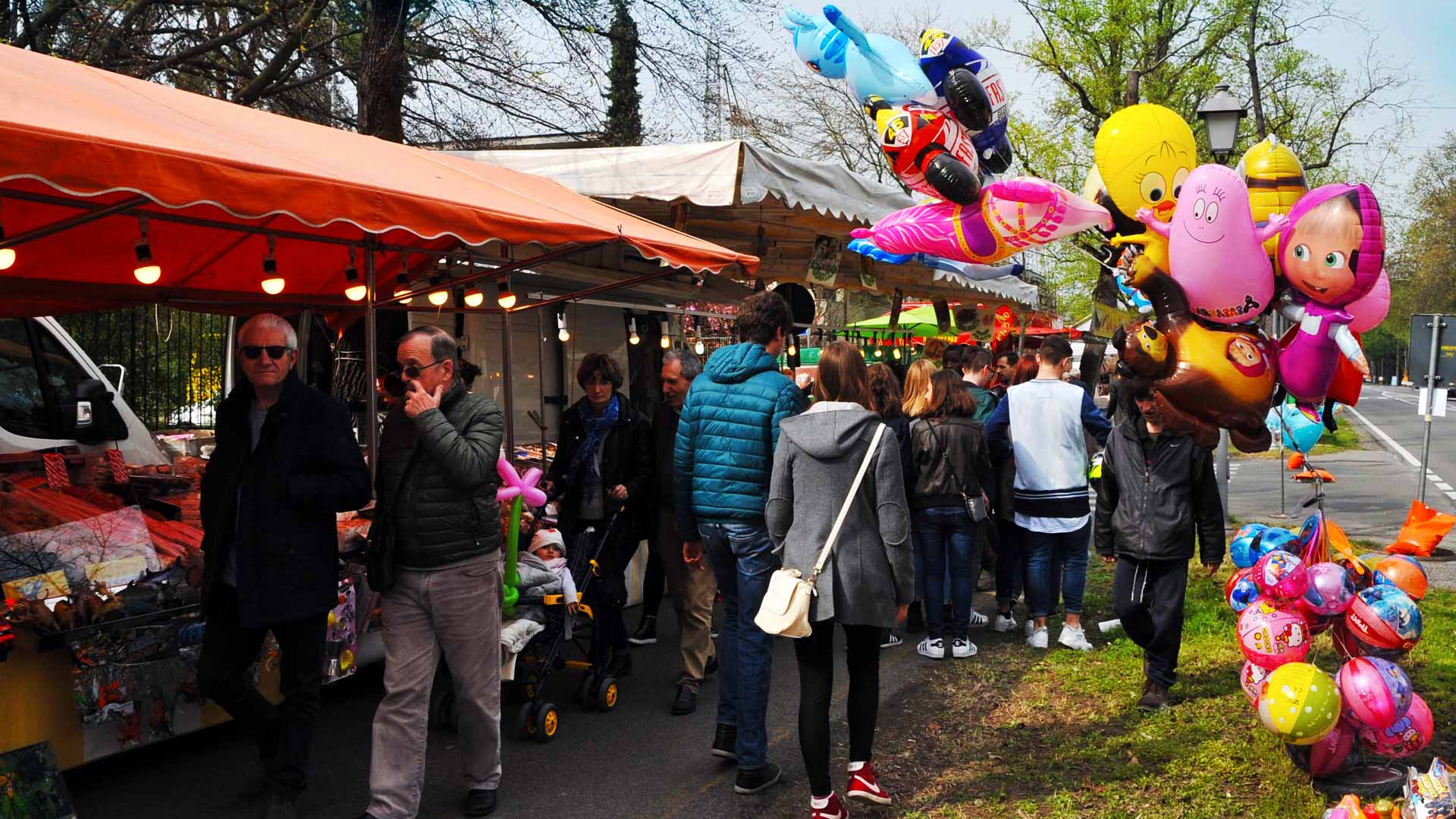 Over the years the festival has seen the entertainment and religious perspectives overlapping the economic motivation of its origins. The avenue that leads to the church is closed to traffic, allowing the visitors the opportunity to stroll among the stalls, carousels and  fairground rides and attractions.
The stalls are set up with flowers, ribbons, pinwheels and balloons, the sweet aromas of candy floss and pancakes permeate the calm and pleasantly crisp air of an early spring, while the multicoloured stalls grab the attention of passers-by and the sound of the carousels creates a festive, playful atmosphere. 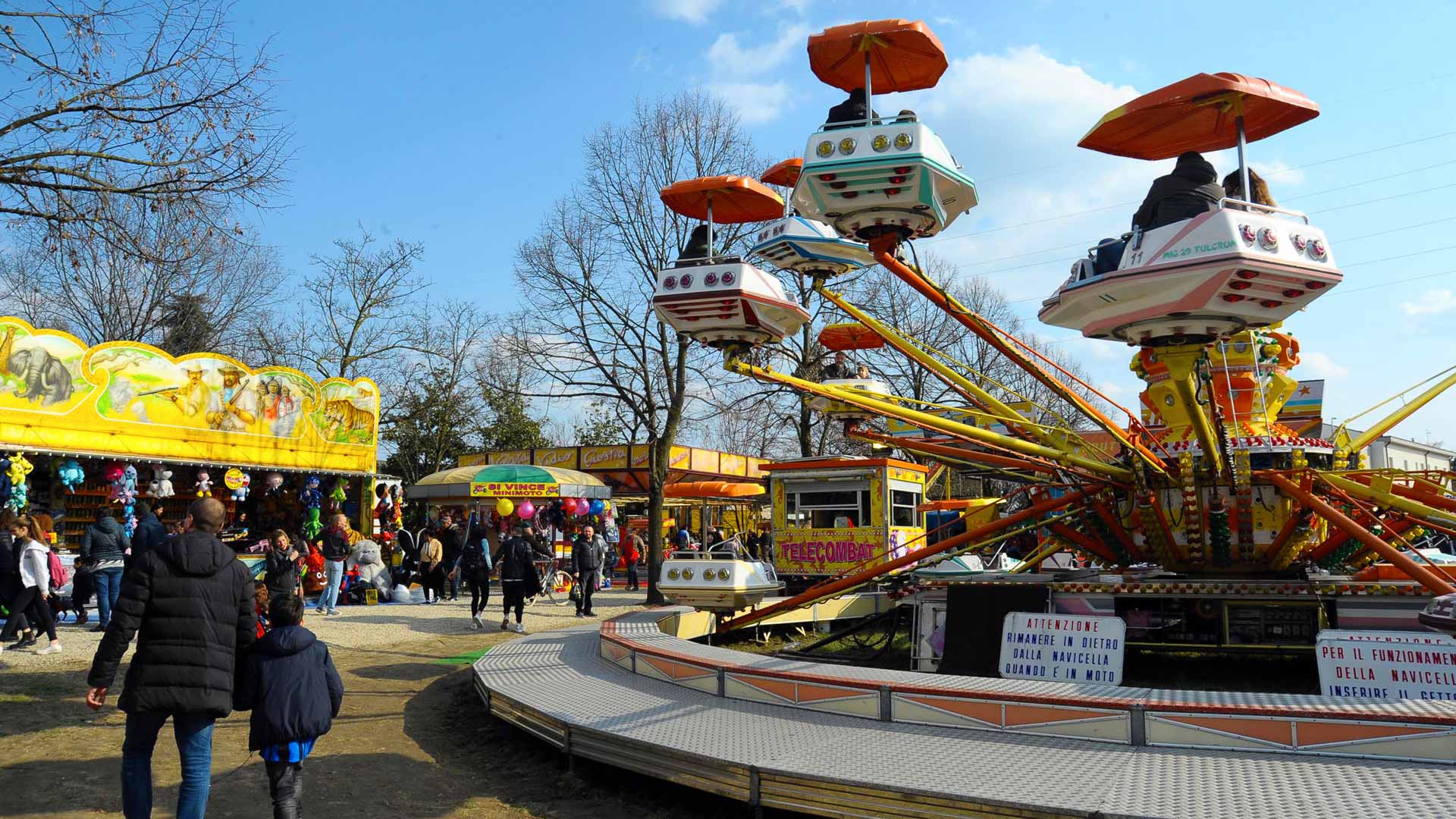 The joyful chaos of the festival is counterbalanced by the implacable presence of the church  ‘Basilica di Santa Maria della Croce’ designed by Bramante, majestically rising up from the centre of the main square.  The church displays a magnificent collection of both architectural and decorative treasures and it is certainly worth taking a break from the amusements for a visit.
The undisputed preeminent figure of the celebration is the Virgin Mary, represented by a statue inside the basilica.  Devotion to the Virgin is of particular importance to the faithful and even today worshippers visit the crypt which houses the very spot where the Virgin Mary is said to have miraculously appeared.  It is customary to touch the habit of the statue with a personal object in order to ensure its protection. 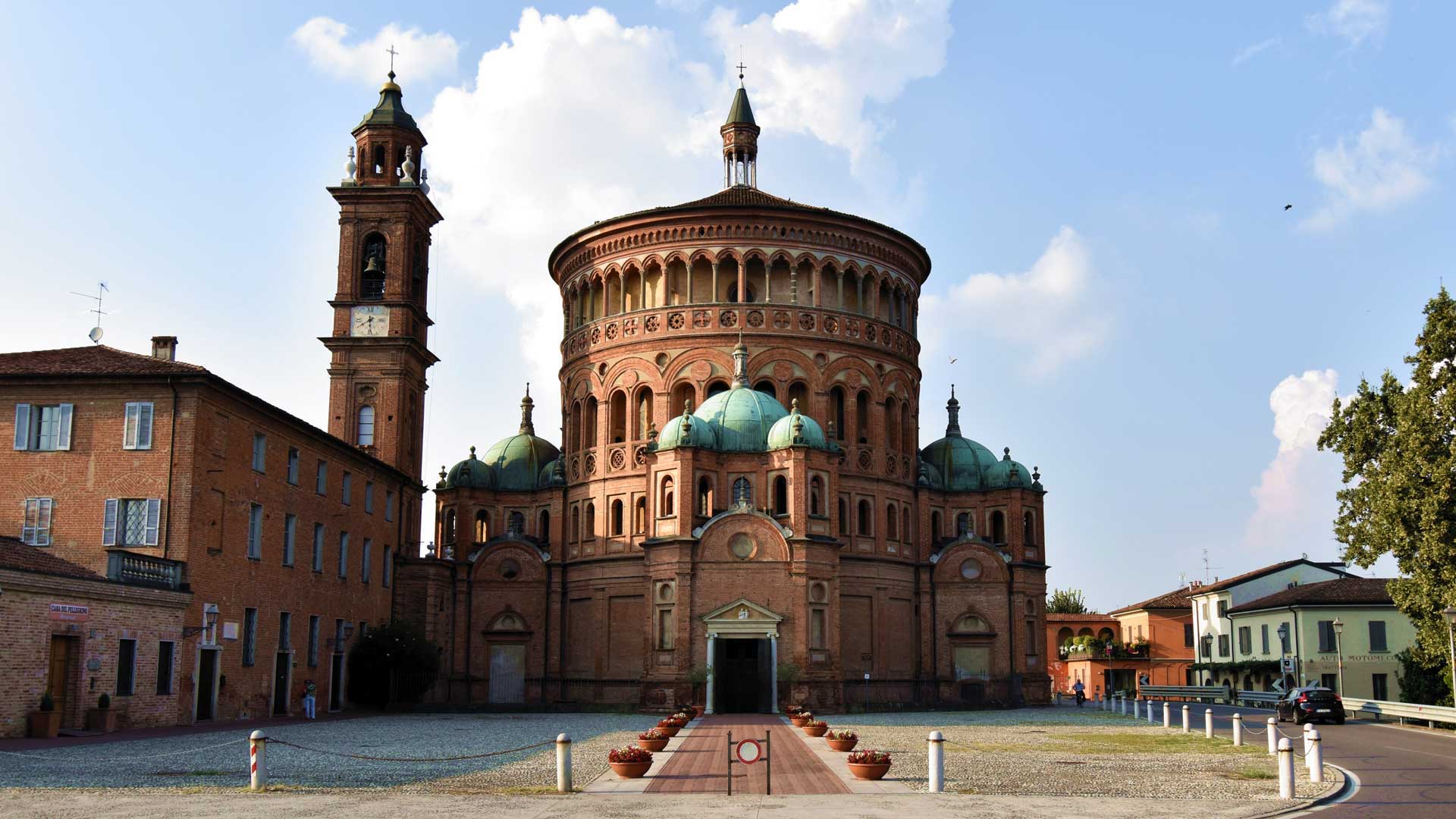 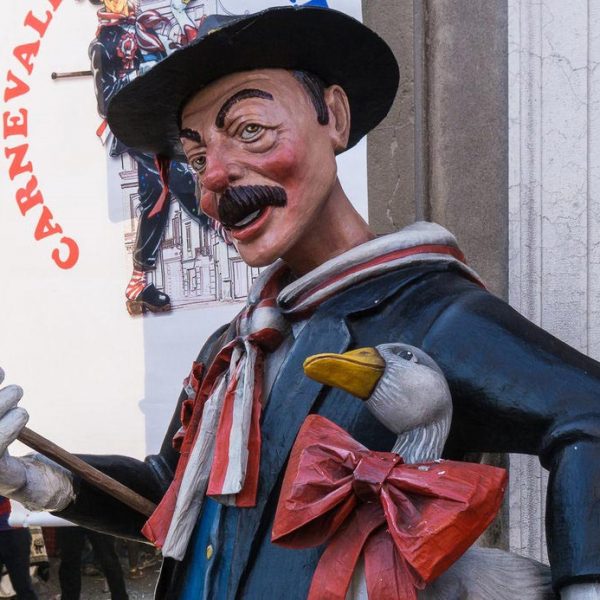 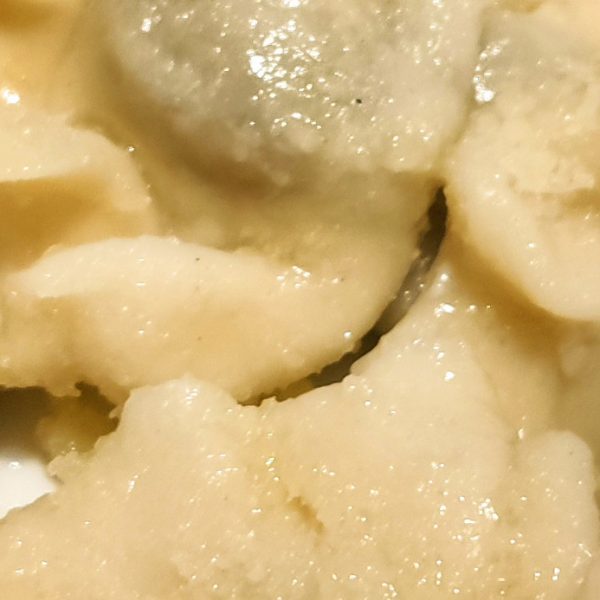 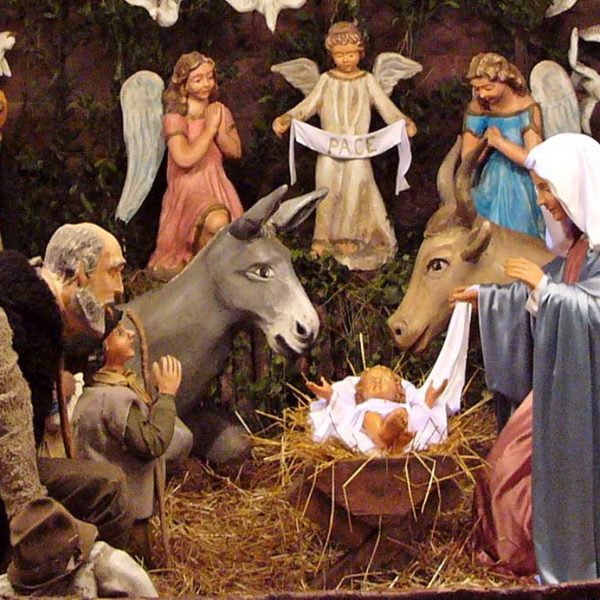