The origin of Crema still remains a mystery

The origin of Crema still remains a mystery today and has been the subject of a number of legends.

The area around Crema was surrounded by water and was known as “Insula Fulkerii”. The word “insula” indicated a strip of land between two rivers, namely the Adda river and an oxbow lake of the Serio river. “Fulcherius” was likely a person. The marshy waters of the Adda river valley were called “mar Gerundo”, “mara” meaning marsh, while “Gerundo”comes from the term “gyrus”, which indicates the river meander. North-east of Crema there was another wide, marshy area, the “Moso”, a small portion of which remains today, protected by the Park called “Parco Agricolo del Moso” founded in 2009. 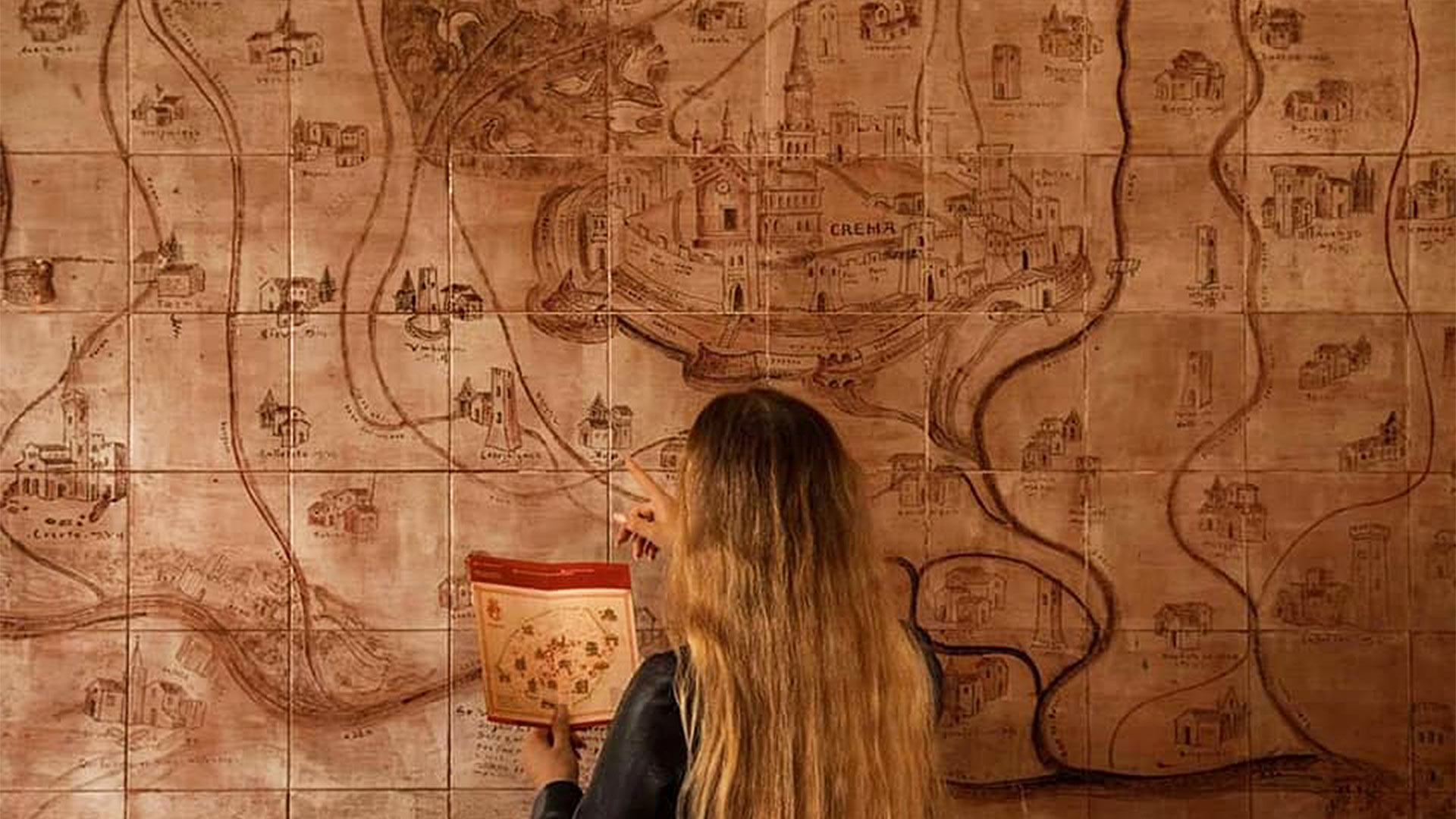 According to a 16th century legend, the founding of Crema took place on August 15th 570, when some inhabitants of the area, escaping from the Longobards, took refuge on a hillock, the so-called “Idolo” hillock, in the centre of this marshy area, which corresponds to today’s “Piazza del Duomo” (Cathedral Square).  They decided to establish a town, the name of which would derive from “Cremete”, the chief of these people.

However, this legend has no confirmation of its sources and according to some scholars the process was exactly the opposite, in other words the place gave the name to the founder. There are other speculations, in some cases rather fanciful, about the etymology of Crema. Some suggest an abbreviation of Cremona, while others lead back to “Cremna”, a town of Pamphylia, whose inhabitants are said to have founded the Lombard town when migrating to Italy in 1500 BC. Another suggestion arises from the Latin verb “cremare” (to burn), as Crema is supposed to have risen from the ashes of a place burnt nearby. Alemanio Fino, a 16th century historian, linked the term to “krema” which stands for shop or market and there are also theories suggesting Celtic or Etruscan origins. 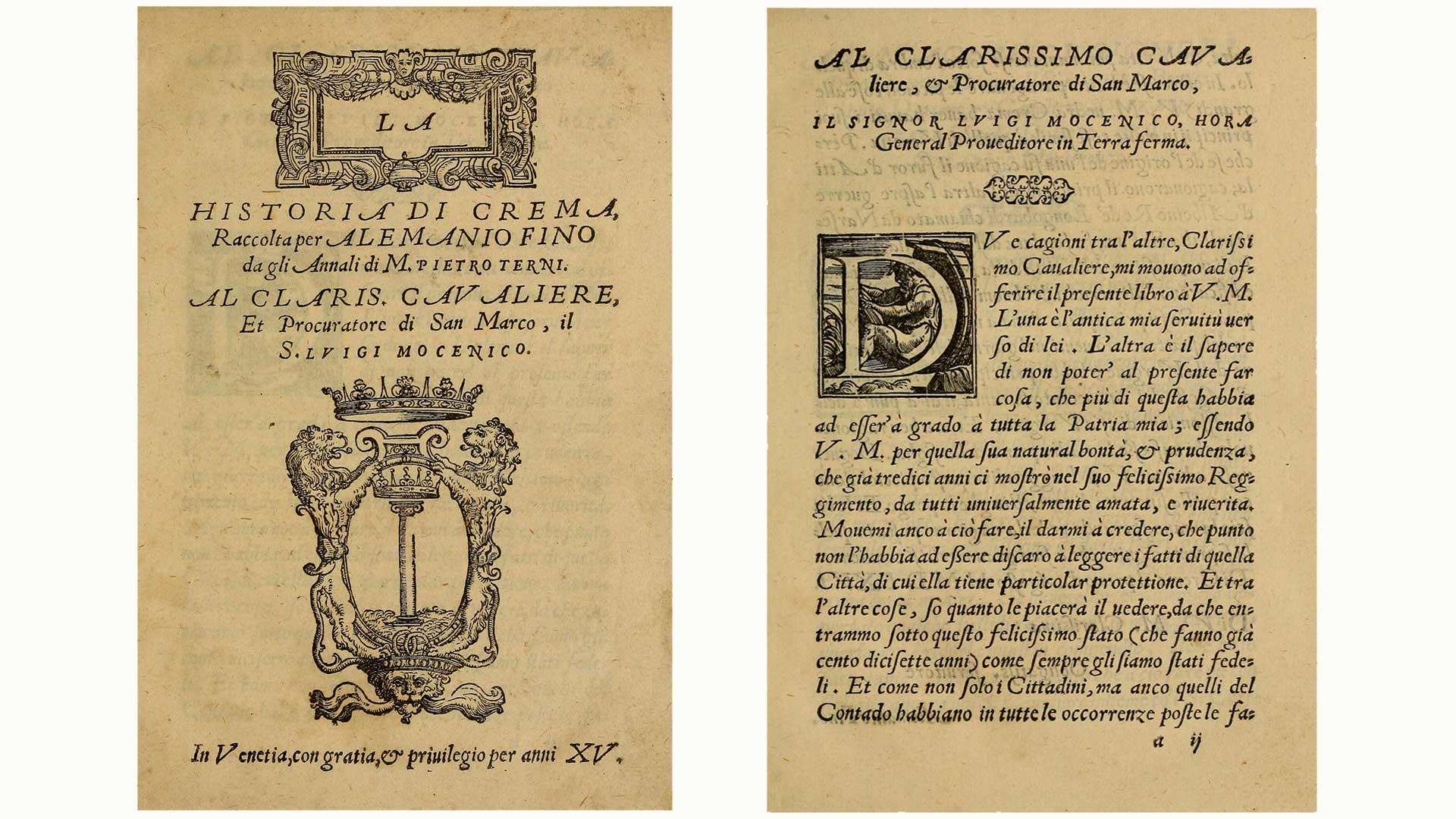 Although fascinating, the above are simple speculations without any support from sources or archaeological findings. The latter testify the presence of human settlements in the “cremasco” territory since the Bronze Age. In Roman times, particularly from the 1st century AD, the area belonged to the Bergamo Ager (field in Latin), as is confirmed by the course of the “centuriazione”, that is the division of the rural territory according to parallel and orthogonal lines.

The most important borough until the Early Middle Ages appears to have been Palazzo Pignano, where the archaeological ruins of a Roman villa and a central plan church and related baptistery, the remains of which can still be seen today. In the Longobard period (6th-8th century) the territory around Crema was part of the Bergamo duchy, as well as during the French period (8th-9th century) and Ottoman period (9th-10th century), when it remained part of the Bergamo committee and several localities became the property of the Gisalbertini Counts of Bergamo. 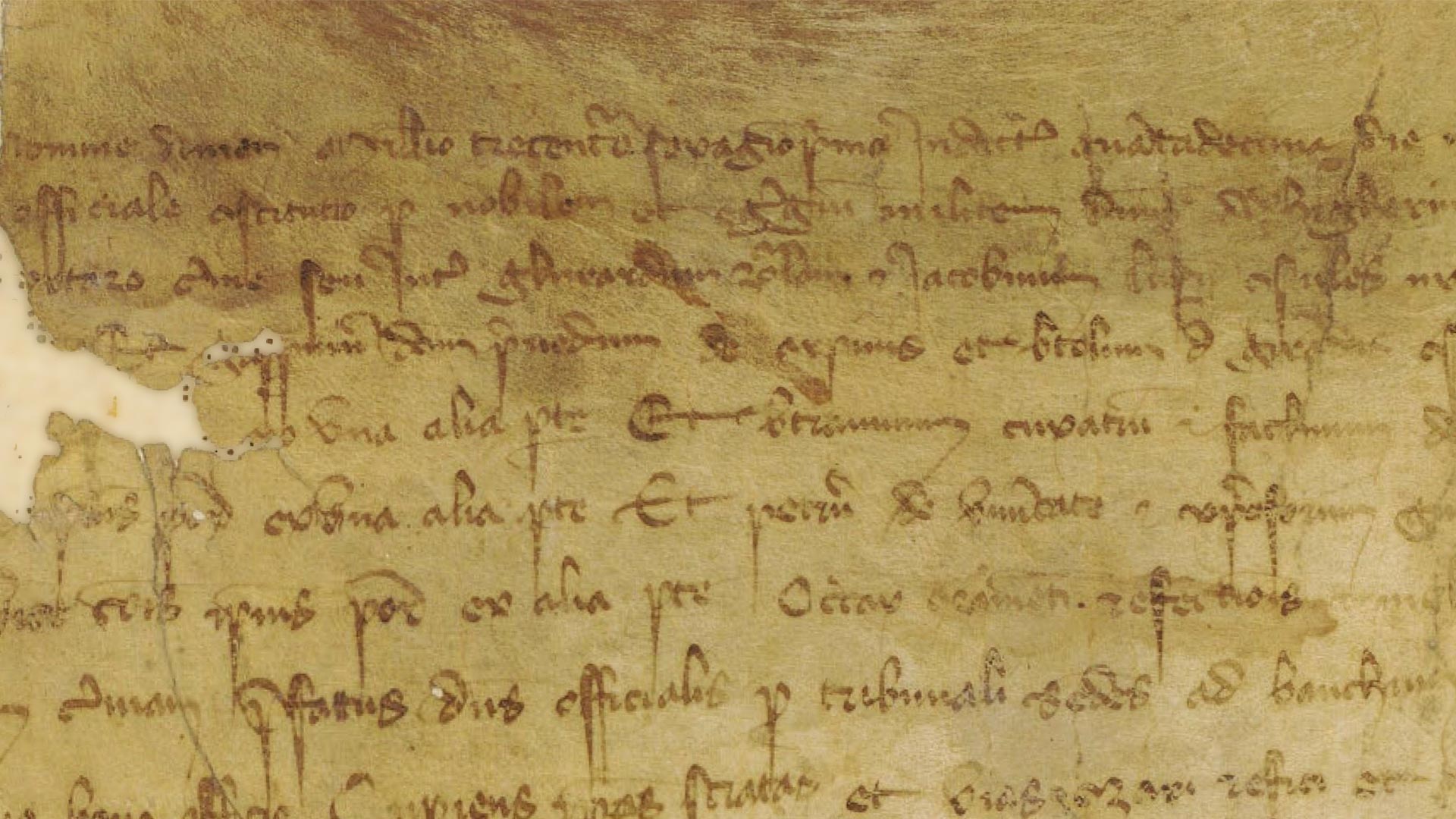 The name “Insula Fulkerii” appears for the first time in a document dated 1040, while the name Crema is attested in 1074 in an act where it is mentioned as the place of origin of a certain man named Rozo. From this moment Crema is increasingly mentioned in a number of quotations where it appears as “locus” and “castrum”.

In effect, in the 11th century Crema was a place of remarkable importance and obtained more and more weight within the balance of power of the Lombard city-states comuni, fighting to enforce its independence from Cremona and moving under the influence of Milan.

The whole 12th century was characterised by an alliance with Milano and by conflict with Cremona and Lodi. The most famous event in Crema history was the siege conducted  by Frederick Barbarossa.

During his second descent to Italy (1158-62), the emperor, supported by Cremona, Pavia and Lodi besieged Crema from July 1159 to January 1160.  The town had rebelled against its neighbours by joining forces with Milano. The town was razed to the ground and Barbarossa forbade the reconstruction of the defensive fortifications. A very famous event in this tragic period of Crema history was that of the so-called “Ostaggi Cremaschi”, Crema hostages who manifested great loyalty to their town.  The Emperor had captive Crema citizens lashed to their machines of war and proceeded to approach the town walls, hoping that the besieged townsfolk would give up their fight in order to avoid killing their fellow citizens.  Unexpectedly, the hostages themselves instigated their fellow townsfolk to continue the attack against Barbarossa, which led to their death.

The reconstruction of the town was made possible only after 1185 on the concession of Barbarossa.  On that occasion Guglielmo V, marquis of Monferrato and ally to the emperor, donated his own insignia to the community, which from that moment became the town coat of arms. 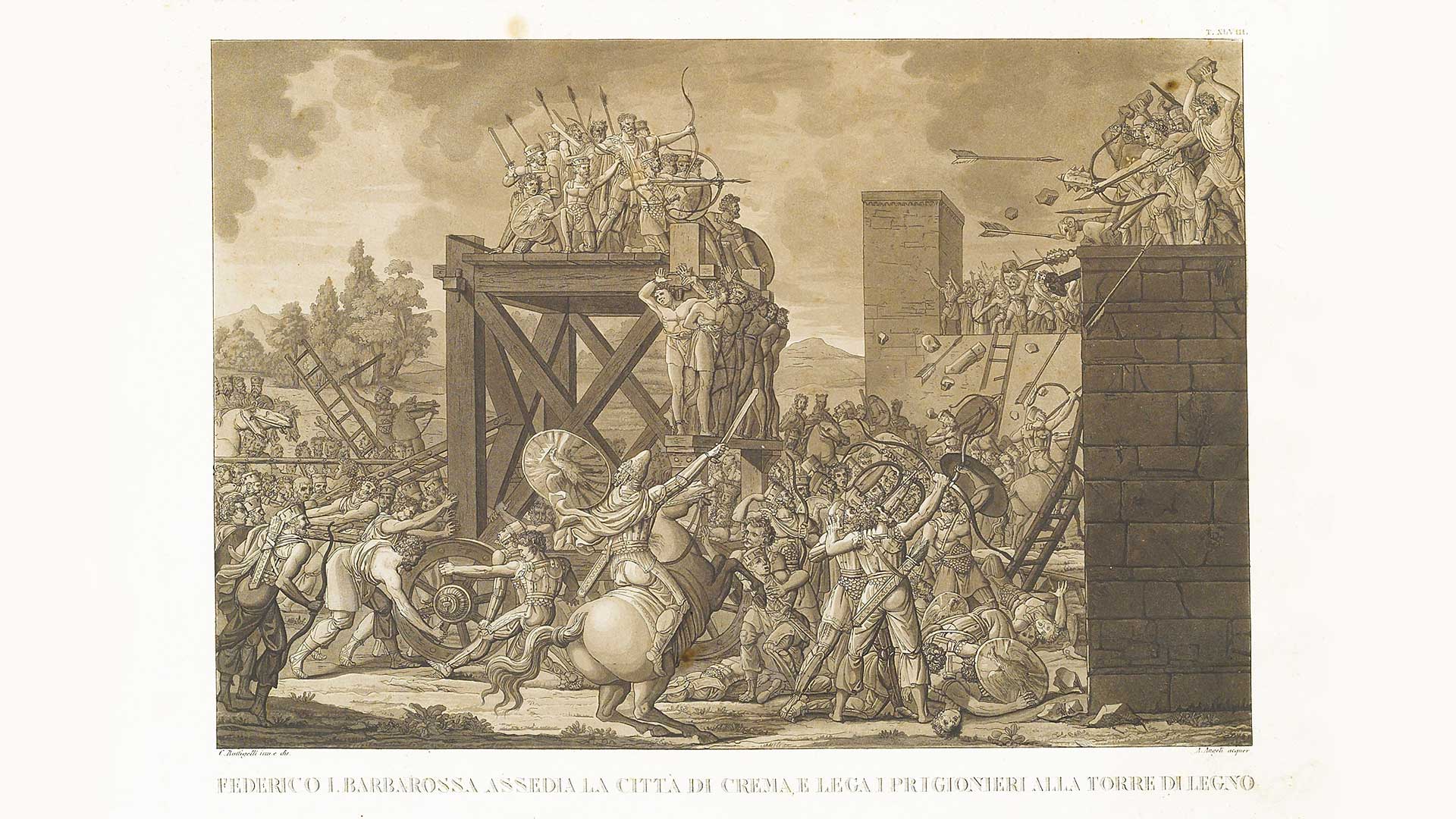 The 13th century was a very prosperous period, from an economic point of view.  Defences were made, including the walls and castle of Porta Serio, as well as embellishments for the town’s decor.  It was during this period that the reconstruction of the town cathedral in the Gothic style took place (1284-1341).  Over these years , like many others, the Crema comune or council was characterised by internal conflict, either between the nobility and the common people or between the “Guelfi” and “Ghibellini” factions, weakening the comune or local institutions. This situation favoured the establishment of the so-called signorie (despotic aristocratic governments) all over Italy.  In 1335 after a brief period under the domination of the Church (c.1322 – 1336), Crema surrendered to Azzone Visconti, which meant the end of its autonomy as the comune ended and a period of submission under the rule of Milano began.  The construction of the castle of Porta Ombriano by Bernabò Visconti dates back to this period. 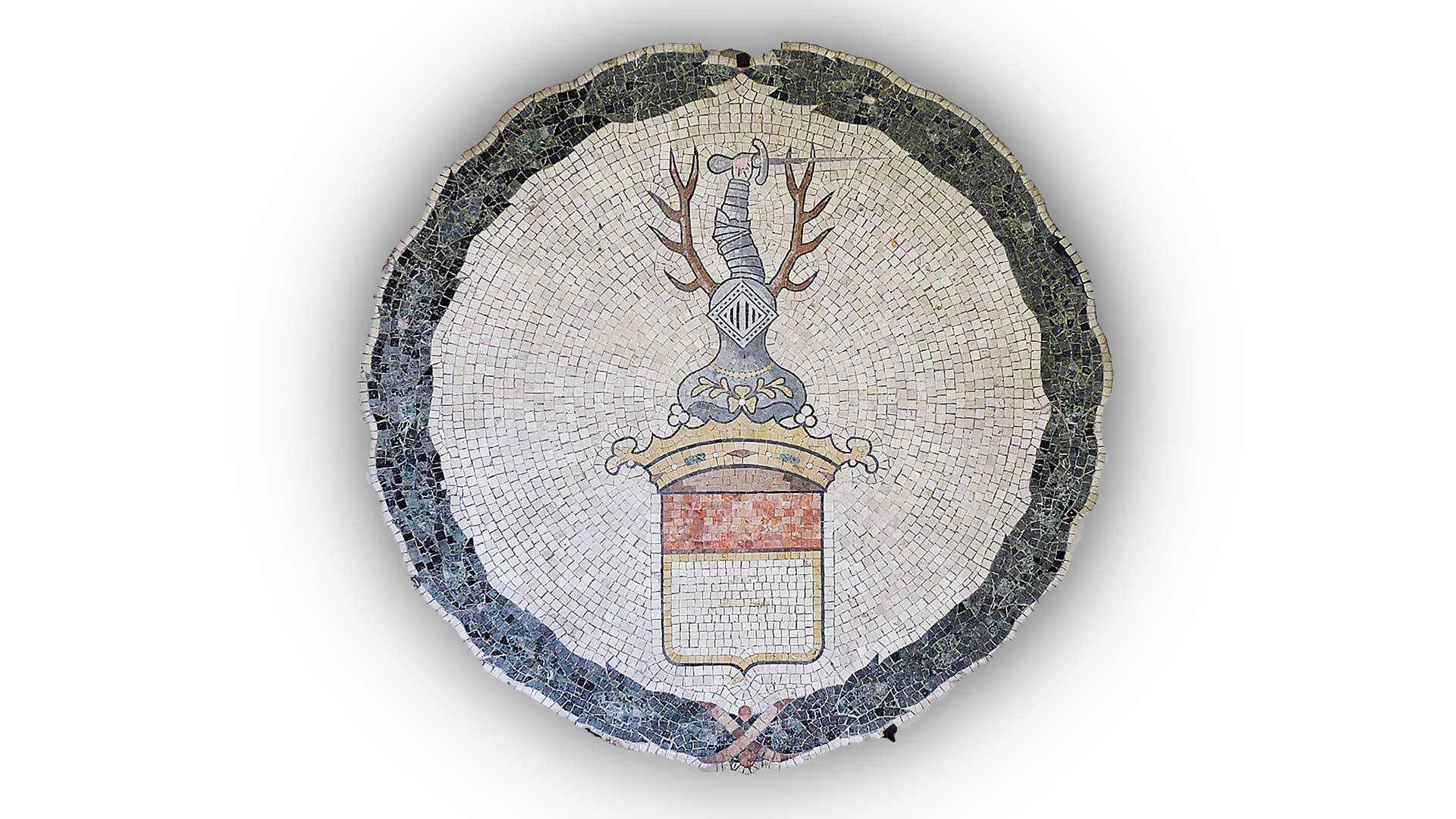 In 1361 the town was hit by a plague epidemic, which devastated the town. This occurrence was the beginning of  the veneration of St. Pantaleone, invoked to rid the town of the disease and from that moment worshipped as patron saint of the town on June 10th every year, commemorating the day on which the epidemic traditionally ended.

Following the death of Gian Galeazzo Visconti (1402), the signoria of the Benzoni was established  after a short period of internal struggles.  First the brothers Bartolomeo and Paolo (1403-5) were in power and then with their cousin Giorgio (1402-23).  Such a signoria was too weak, in fact it lasted only twenty years, after which, the town returned under the control of Milano. During the signoria period, Crema had its own mint.  Some rare coins dating back to this period are kept at the Crema Civic Museum. 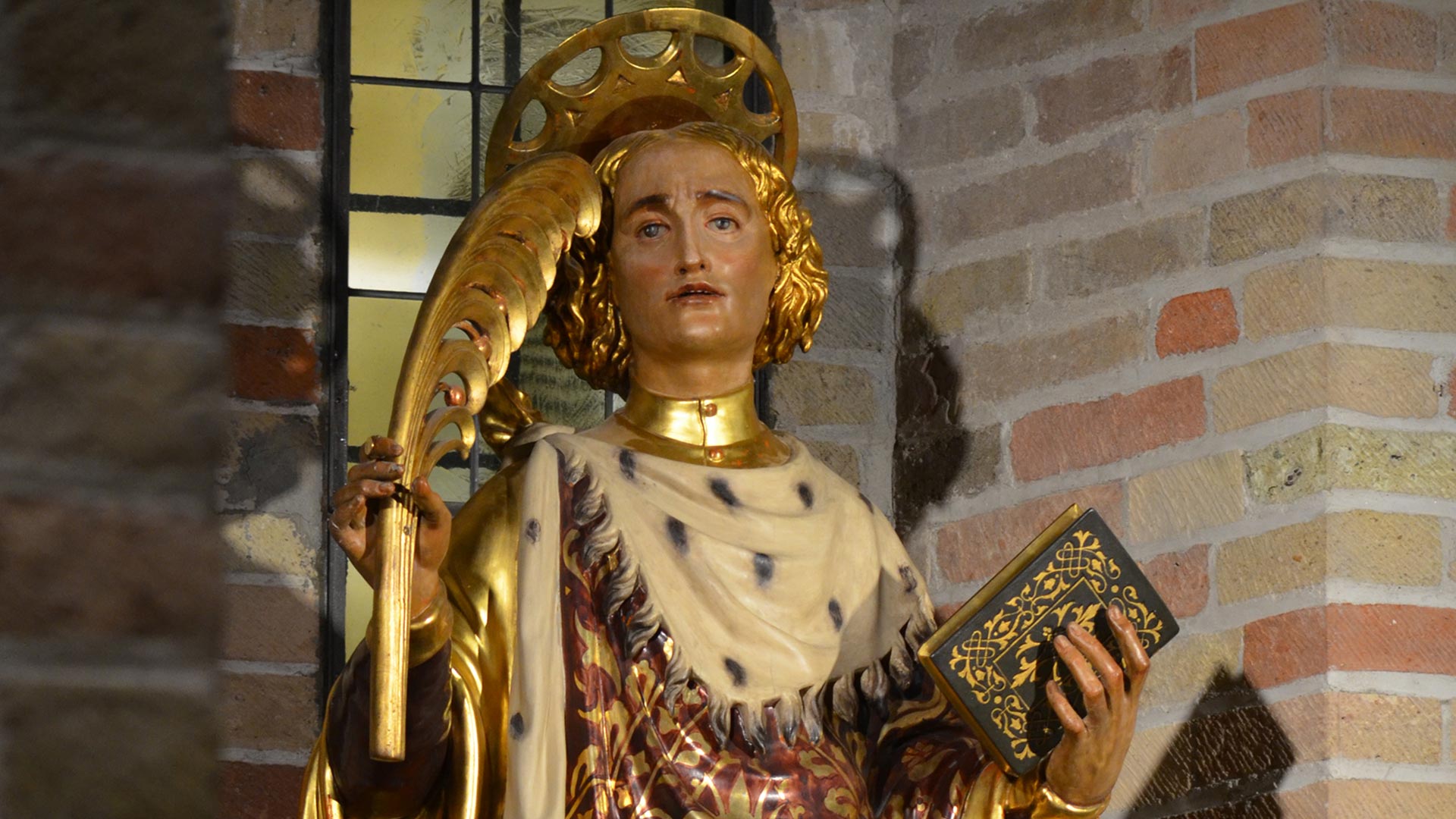 In the meantime, the rivalry between Milano and Venezia was intensified by the expansionist aims of both states. The Venetians, advancing in Lombardia, besieged Crema on September 16th 1449 and surrendered to Venezia.  This marked the beginning of the dominion of the Republic of Venezia, the so-called Serenissima, destined to last, except for a brief interval in 1509-12, until 1797. 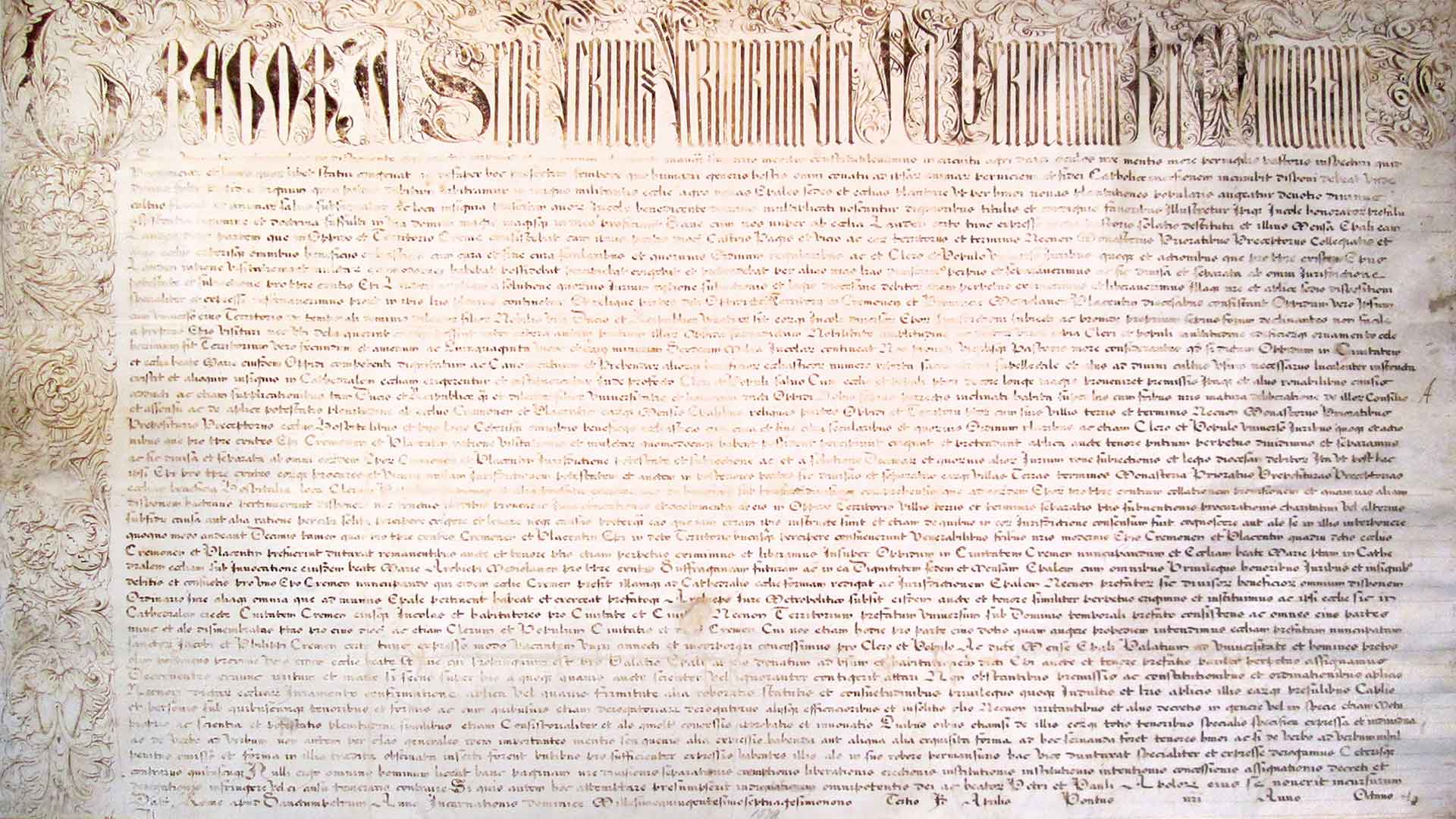 The dominion of the Serenissima Republic of Venezia over Crema established a period of peace and prosperity, and above all, considering its strategic position, the town was granted a good degree of administrative autonomy. The motherland also favoured the establishment of an autonomous diocese in 1580. The lifestyle of the townsfolk was influenced by the Venetian domination, which favoured culture and the arts and a tendency to ennoblement.  Many architectural works date back to this period, as can be seen in the arrangement of the current Piazza Duomo, Cathedral Square with the construction of new buildings, the demolition of the castle of Porta Ombriano and the extension of the Porta Serio castle, the construction of the Venetian walls (1488-1508), as well as the erection of many churches and convents. 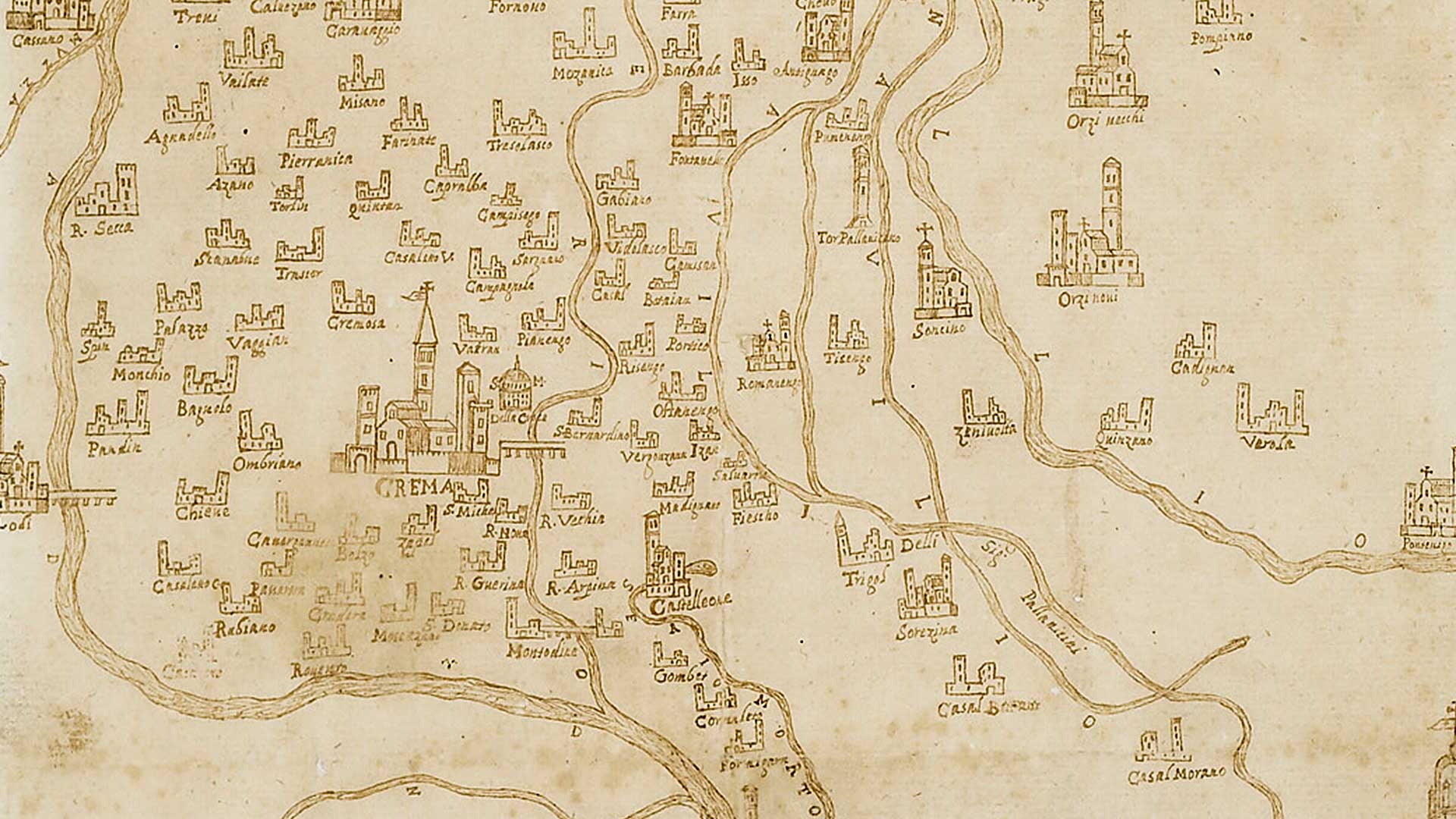 The territory around Crema was not spared by the spread of the plague in 1630.  The chronicles tell of 10,000 dead and a leper hospital set up in Santa Maria della Croce.

The 18th century was also characterized by the flourishing of the arts and the town was enriched with churches, palaces of the local nobility and with the construction of the theatre.  The latter began construction in 1708 and was then rebuilt between 1782-86 to a design by Giuseppe Piermarini.  Unfortunately the theatre was destroyed by fire in 1937. 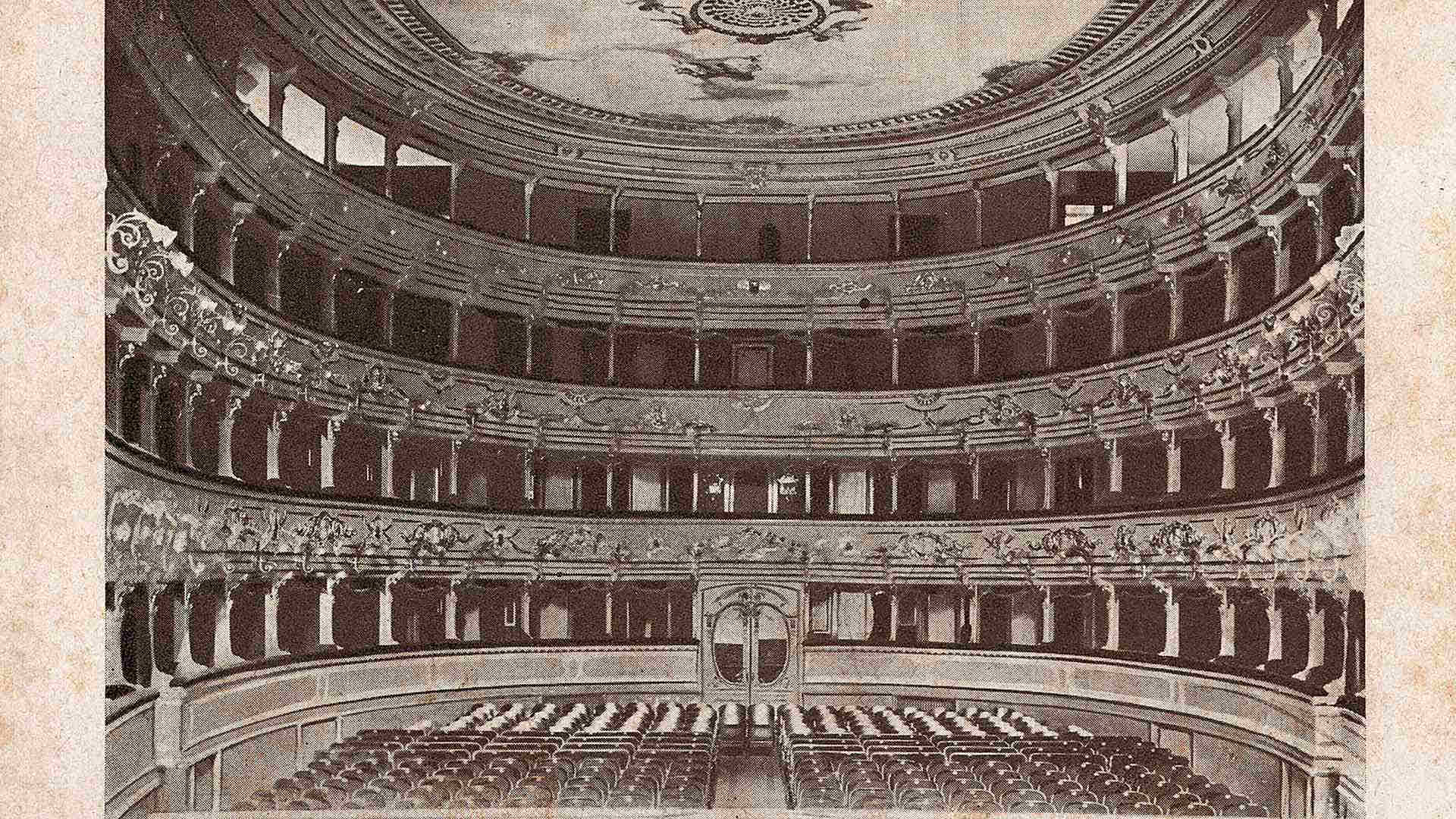 The dominion of the Serenissima ended with the Napoleonic Wars.  On 27th March 1797 the French entered Crema and established the municipality, first as the Republic of Crema, then absorbed after only two months into the much wider Cisalpine Republic. Following the creation of the Province of Lodi and Crema (1797), the town divided the role of capital. This period dates back to the suppression of the seminary, religious orders and convents, as well as the confiscation of religious property.  In addition, the French dominion entailed the application of the Napoleonic codex, the spread of education and liberal ideas.   Public night lighting was also installed and the castle of Porta Serio was demolished. 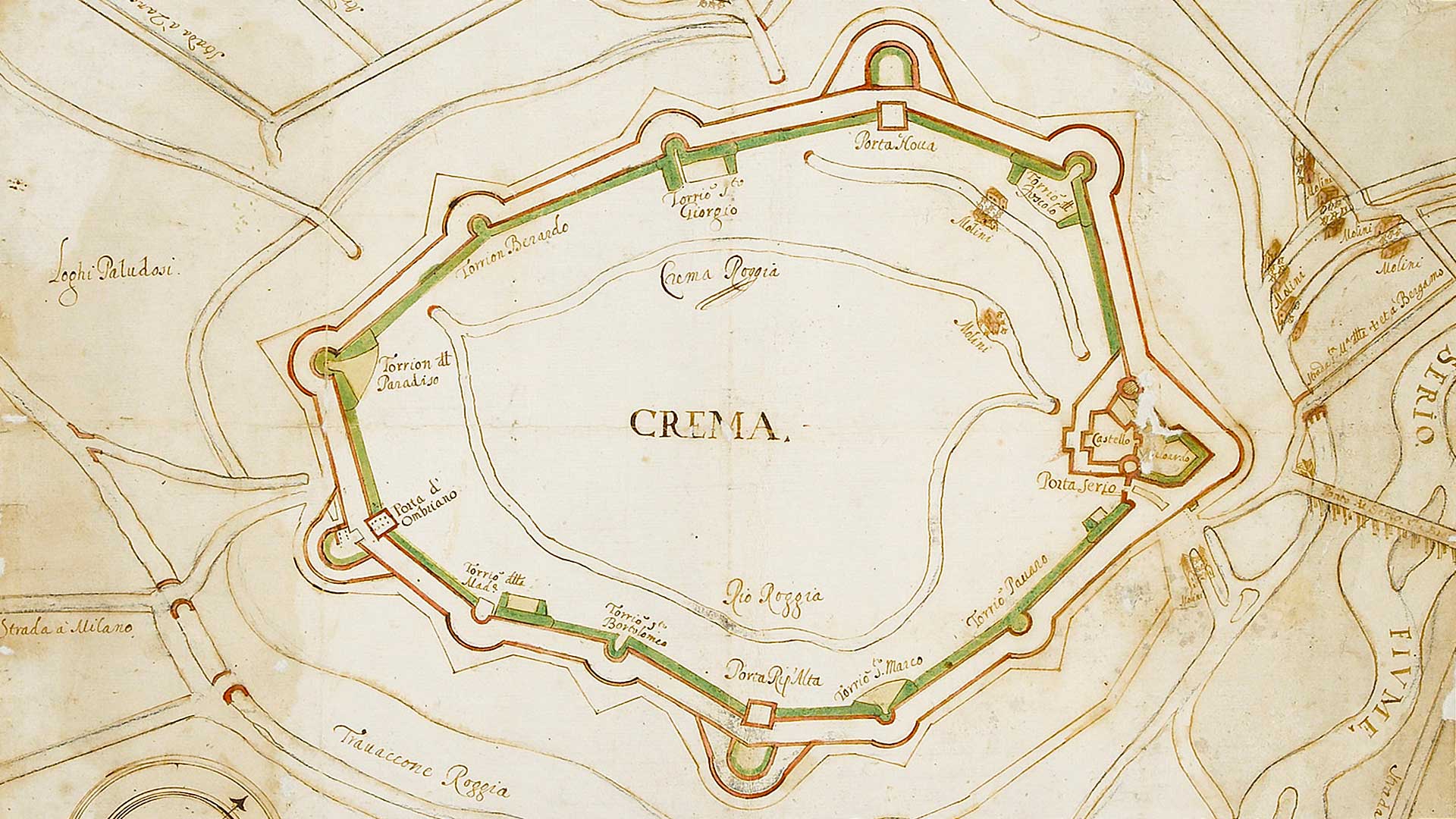 The Congress of Vienna (1814-1815) marked the end of the Republic of Venezia and its merging with Lombardia, creating the  Lombardo-Veneto Kingdom, under the Austrian Empire. As far as local administration was concerned, the new province of Lodi and Crema was maintained (1816). The thirty years of Austrian dominion were essentially a calm period.  The economy, agriculture and activities related to flax weaving were particularly favoured, in addition specific attention was given to education. The Gates of Porta Serio and Porta Ombriano were rebuilt in the  Neo-Classical style and the wheat market was erected. 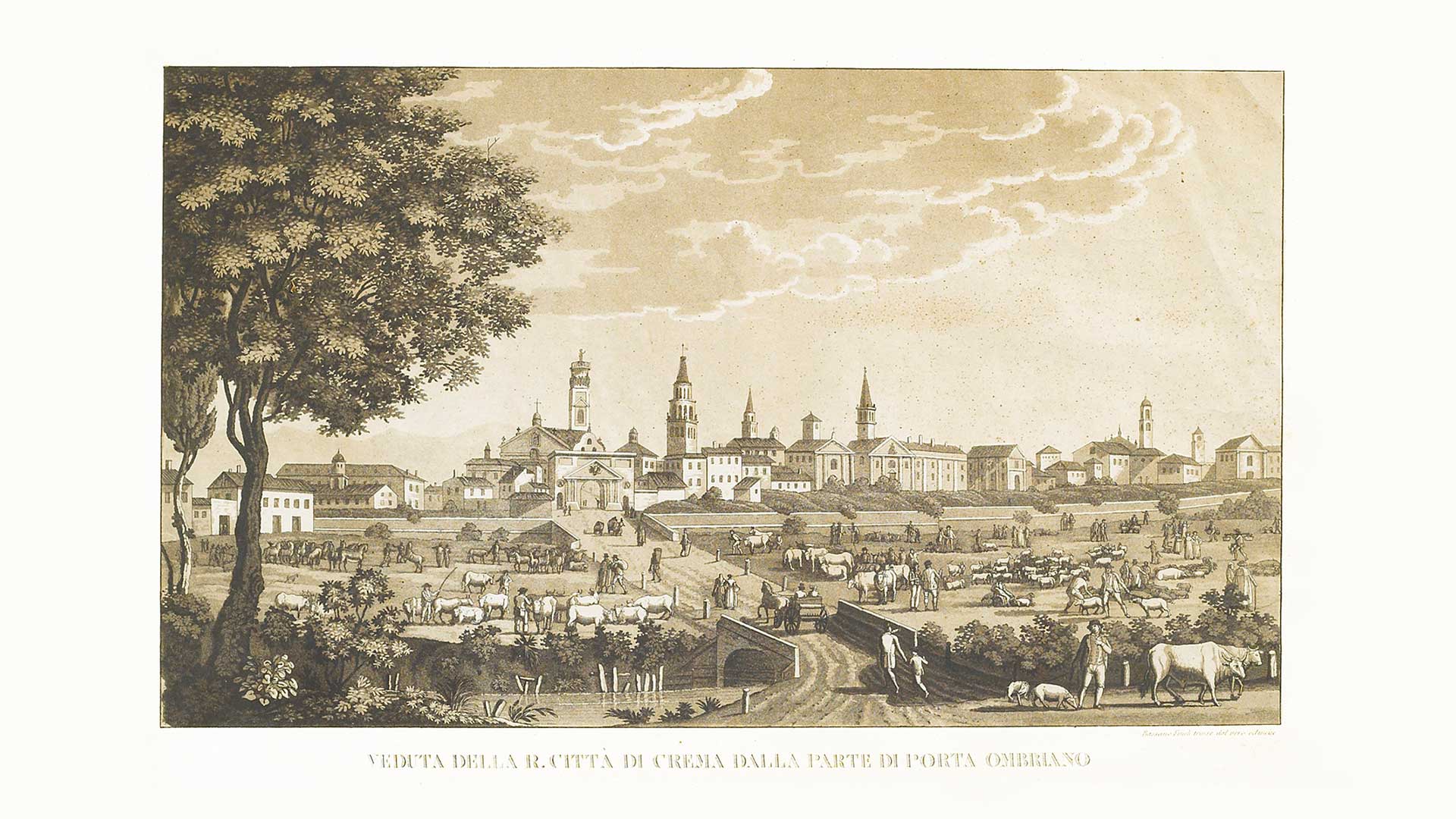 In 1859 Crema and its territories became part of the Kingdom of Savoia Sardinia, destined, shortly thereafter (1861), to become the Kingdom of Italy. Afterwards, Crema followed the historical events of the unification of Italy. The new government joined the territories of Crema and the Province of Cremona, which have remained so until the present day.

In the twentieth century the development of the town was further improved, especially as far as road networks and transport were concerned, as well as entrepreneurial and industrial activities. Between 1862 and 1863 the railway line connecting Treviglio with Cremona via Crema was built and is still operative today.  In 1880 the Milano-Lodi-Crema-Soncino tramline was launched, but subsequently dismantled in 1931. 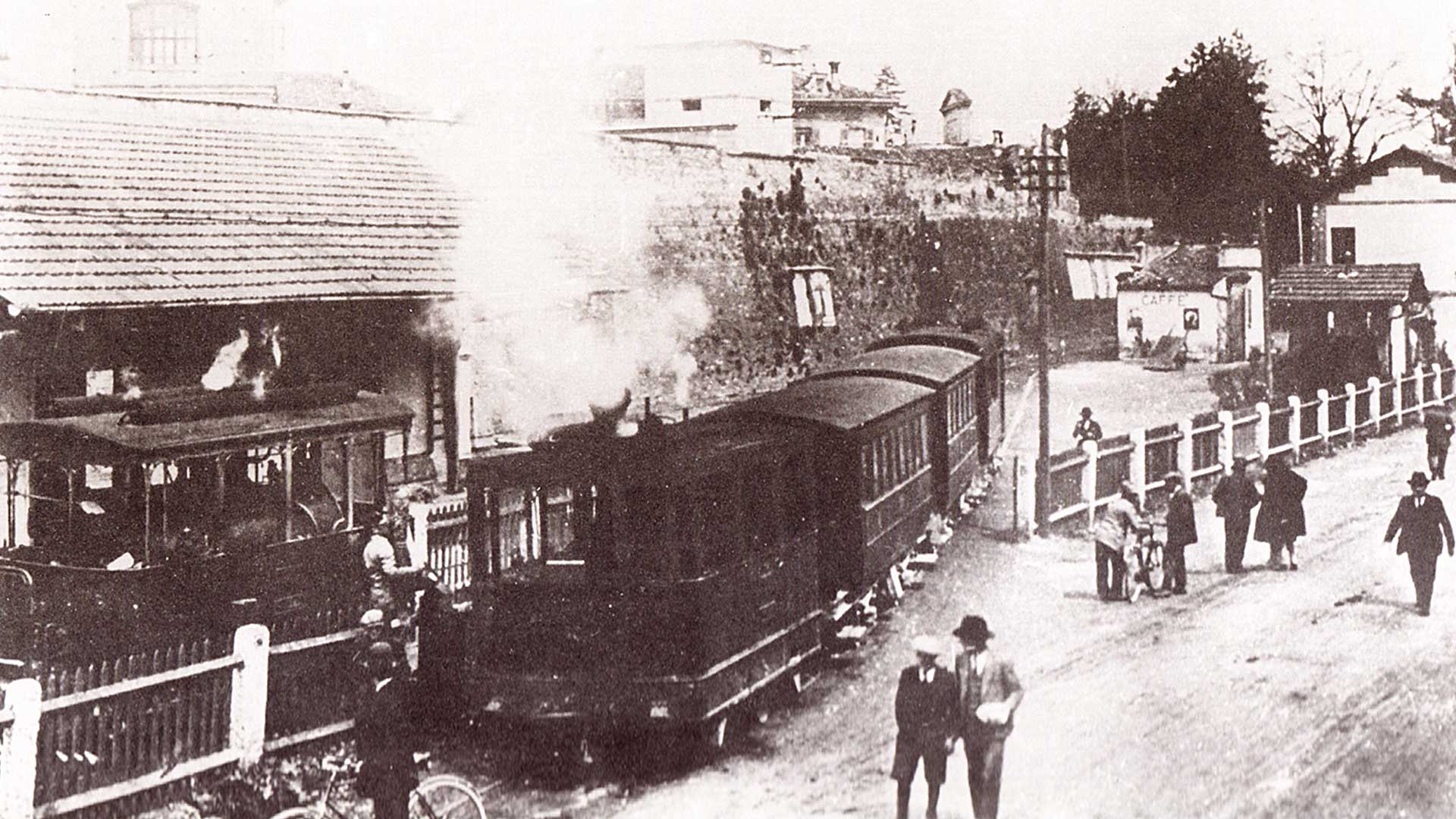