Warning: touch(): Utime failed: Operation not permitted in /home/turismocrema/public_html/wp-admin/includes/class-wp-filesystem-direct.php on line 516
 Da Vinci in the Country Side - Turismo Crema

Da Vinci in the Country Side 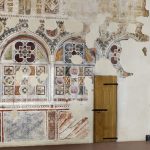 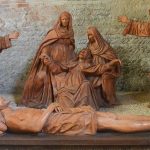 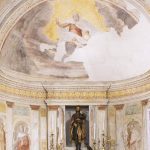 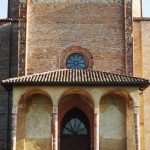 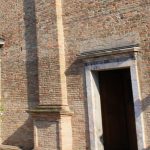 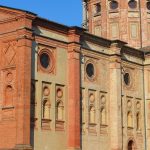 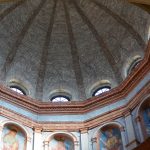 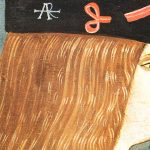 From 1449 to 1797 the Cremasco area was part of the Republic of Venice, but the geographical proximity to Milan made it frequent the movements of nobles, merchants, ecclesiastics and artists between the two territories. Leonardo da Vinci (Anchiano, near Vinci, April 15, 1452 – Amboise, May 2, 1519) never had a direct relationship with our territory, but as in the city of Crema, there are many characters linked to him who had to deal with the neighboring countries, not to mention the artists who, despite not having personally known the Tuscan, were deeply influenced by his ideas. The route that we propose to you on the trail of the da Vinci passes through five towns in the surroundings of Crema: Rivolta d’Adda, Pandino, Palazzo Pignano, Offanengo, Izano, Castelleone.

The oratory is probably built in the first half of the fifteenth century. Between 1497 and 1499 the interior was rebuilt by the will of the Immaculate Conception brotherhood, adopting an updated barrel vault roof over the new architectural models introduced in Milan by Donato Bramante (Fermignano, 1444 – Rome, 11 April 1514).

In 1506 the vault was painted by Giovan Pietro Carioni (documented between 1495 and 1506) and Martino Piazza (Lodi, about 1475-80 – before 1523) with a series of male and female busts inserted in fake stucco frames decorated with grotesques on a red background. The faces of the characters take up Leonardo’s ideas and drawings regarding physiognomy and the manifestation of emotions through facial expressions.

The same painters from Lodi realized the 12 scenes depicting episodes of the Life of the Virgin Mary. The castle was built by the lord of Milan Bernabò Visconti and his wife Beatrice Regina Della Scala, around 1355-1370. From 1414 to 1423 it belongs to Giorgio Benzoni count of Crema and Pandino. From 1434 to 1464 it was a fief of the Sanseverino and from 1469 to 1477 of Ludovico Maria Sforza known as il Moro, the future duke of Milan and client of Leonardo. In 1479 it returned to the Sanseverino family. From 1499 to 1509 it passed under the dominion of the Republic of Venice. From 1512 it was owned by Guido Sanseverino who was assassinated in 1514. After his death, Galasso Landriani, who had married Ludovica Sanseverino sister of Guido, became Count of Pandino. Until 1542 the castle remained the property of the Sanseverino, while from 1547 to 1947 various other families followed one another until it was acquired by the Municipality.

Matteo Bandello (Castelnuovo Scrivia, circa 1484 – Bazens, 1561) sets the frame of one of his tale (Part I, Tale 34) dedicated to Ludovica Sanseverino Landriani wich tells the amusing misadventures of a fool from Bergamo. The present Romanesque church was built between around 1125 and 1150 rises above a previous round church dating back to around 350 AD.
Inside there is a Lamentation composed of eight terracotta statues depicting: Dead Christ, Joseph of Arimathea, Saint John the Evangelist, (Mary) Salome, Mary of Nazareth (Blessed Virgin Mary), Mary of Cleophas, Mary of Magdala (Magdalene) and Nicodemus. The scene represents the moment in which the body of Jesus has just been laid down from the cross and is about to be placed in the sepulcher.
The group, the work of the sculptor Agostino de Fondulis (Crema, about 1460 – about 1521), was created between about 1510 and 1511 for the church of Santa Maddalena in Santo Spirito in Crema. It was transferred here between 1805 and 1812 thanks to the Vimercati Sanseverino family who had purchased the Crema church after the Napoleonic suppression. 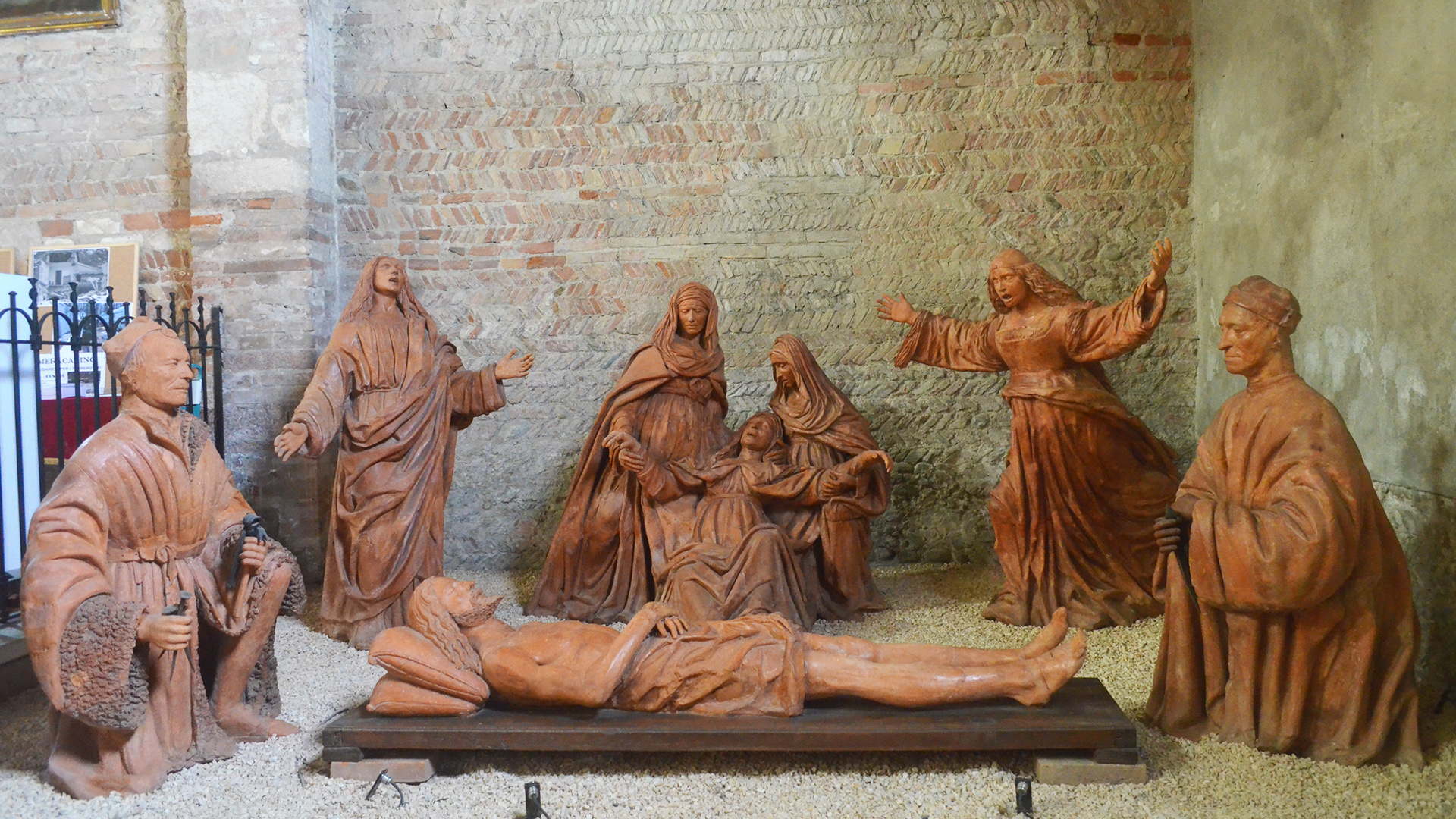 The oratory of San Rocco was founded in the second quarter of the sixteenth century as an ex-voto of the Community of Offanengo against the plagues. It has a simple architectural appearance: it has a single hall of the type with transverse arches and a semicircular apse – externally polygonal and characterized by pilasters that fold like a book at the corners -, with the bell tower that is set on the right side. The front is closed by two half-pilasters on a high pedestal, which have capitals of Albertian memory; it is crowned by a wind gable with pinnacles at the top and a frame decorated with dentils. At the center of the façade is an oculus with a terracotta frame containing an elaborate plait motif. 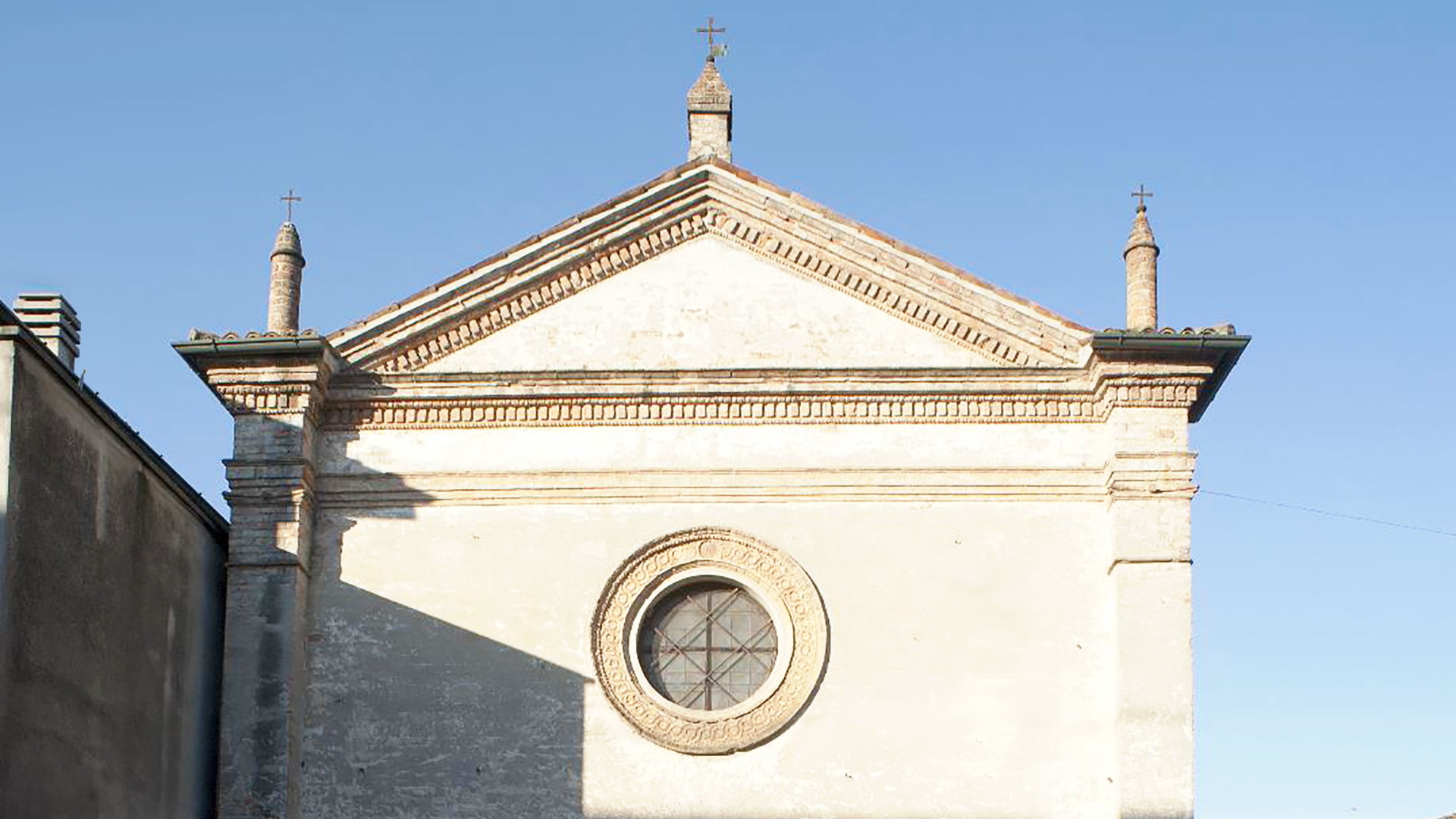 Also the entrance portal has a fictile frame, composed of various panels that imitate a grooved and rudimentary frieze, similar to the one painted in the internal entablature. This type of decoration testifies to the fortune of the decorative motifs diffused by Agostino de Fondulis (Crema, about 1460 – about 1521) even after the disappearance of the sculptor. 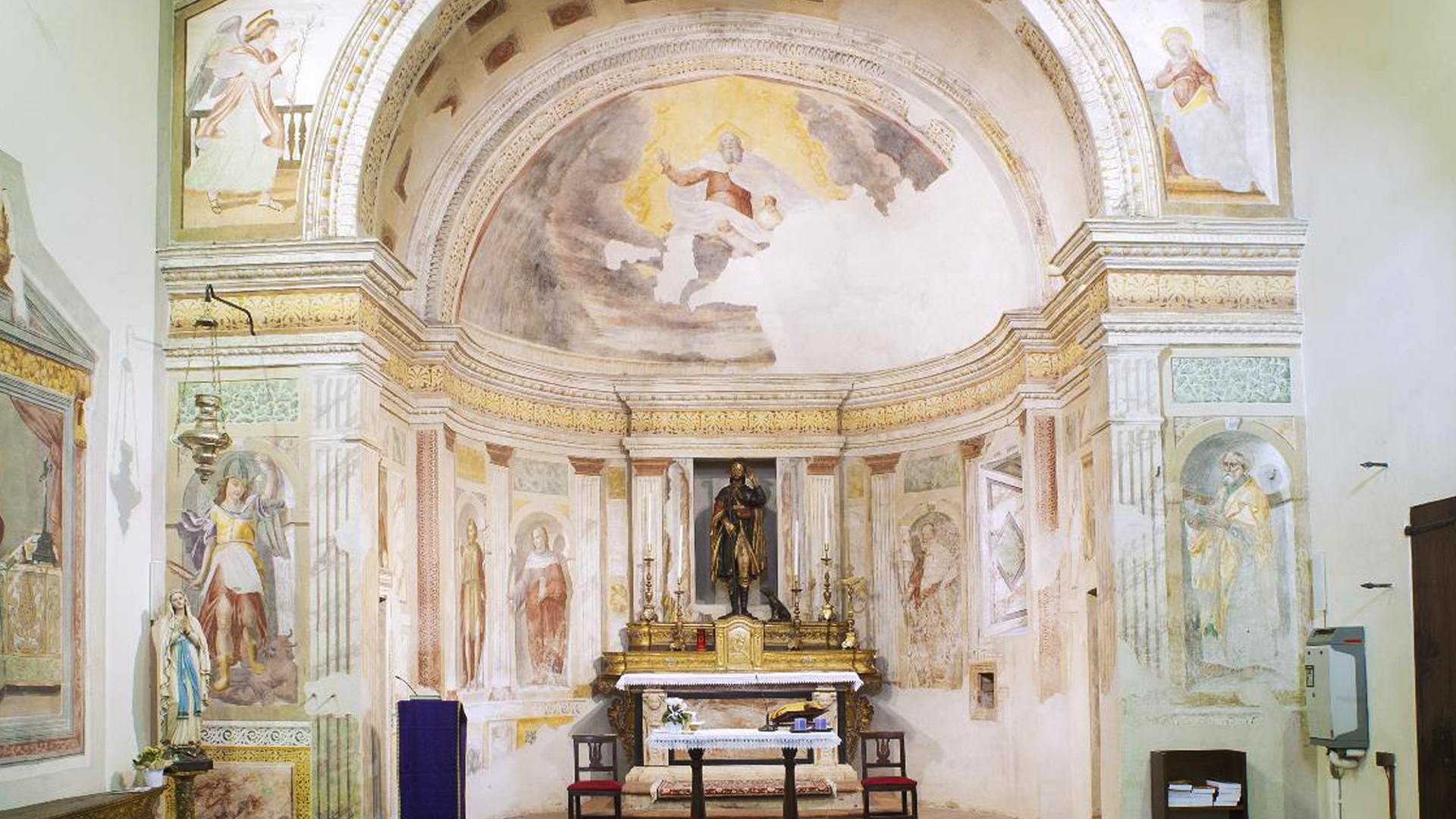 The construction probably of fourteenth-century origin was dedicated to Saint John the Baptist. Over time due to the devotion to the saints Roch and Sebastian, protectors against the plague epidemics, it assumed the current denomination.

Inside, the building contains three terracotta sculptures depicting the Madonna with Child and the Saints Rocco and Sebastiano perhaps referable to the workshop of Giovanni (documented from 1448 to 1491) and Agostino de Fondulis (Cream, about 1460 – about 1521) and datable around 1485-90. The foundation of the church is due to settle in Castelleone as early as 1460 by the Franciscan Amedeo Menez de Silva, the ascetic and visionary of Iberian origins who founded the Amadeiti, and the direct involvement of the Dukes of Milan, Francesco Sforza and Bianca Maria Visconti. The building started in 1465 and was still under construction in 1469; the dedication to the Madonna of Guadalupe, unique in Italy, derives from that of the monastery of Our Lady of Guadalupe in Extremadura. The church has a central square core covered by a pavilion vault on an octagonal base (fig. 11), to which four other square spaces covered by domes are added along the orthogonal axes, which give the building a central cruciform structure almost unique in Lombardy. In the sixteenth century the apse, the bell tower and the portico in front of the building were added. Outside (fig. 12) we can see the volumes profiled by terracotta decorations, except for the roofs, according to the Lombard tradition, the smaller ones are hidden by the roofs and the central one by the tiburio. The terracotta friezes are the work of the Cremona sculptor Rinaldo de Stauris (documented from 1450 to 1494). Inside there are the terracotta reliefs by the same sculptor. The paintings that decorate the central hall, depicting Scenes from the life of Christ, are the work of a Lombard painter active at the end of the fifteenth century. The statue of the Madonna with Child present in the right arm of the cross inside a glass case is the work of the sculptor Sperandio Savelli (Mantua, about 1431 – Venice, 1504). The laying of the first stone of the new parish church of Castelleone, on a pre-existing XII century, is attested to 4 May 1517 to a design by Agostino de Fondulis (Crema, about 1460 – about 1521), but the construction continues according to local sources until to 1551. It is a building that despite the traditional longitudinal layout with three naves, shows in the articulation of the central nave the use of a Roman-style party punctuated by strongly projecting half-pilasters, which mark the space continuing in the transversal arches of the vaults. This articulation of the elevation shows the consolidation in the Lombard area of ​​a language that has now become part of the spirit of the place (think of San Sigismondo in Cremona and some Milanese Bramante solutions) and adherence to the old-fashioned language, also deployed in the refined terracotta capitals and in the rich cornices that also adorn the oculi and summit entablatures externally.

The façade is subdivided by pilasters, with a central tympanum and lateral half-steps, which seems to be the simplification of a type of perhaps Bramante origin, spread in the Lombard and Emilian areas starting from the nineties of the fifteenth century. Inside is the lower part of a polyptych depicting the Madonna with Child, Saint Francis and Blessed Amedeo Menez de Silva dating from around 1517, by the Spanish painter Pedro Fernández (Murcia, about 1480 – after 1523) strongly influenced by Bartolomeo Suardi known as Bramantino (Bergamo, about 1465 – Milan, 1530). The other compartments of the polyptych are preserved in the Ala Ponzone Civic Museum in Cremona. The Marian Sanctuary of the Misericordia was built between 1513 and 1525 to a design by Agostino de Fondulis (Crema, about 1460 – about 1521) outside the town of Castelleone, in the place where the Virgin appeared to the peasant Domenica Zanenga (1511). The church has a single nave with a triconch crotch, that is, with three semicircular apses, with ancient decorated basins; the presbytery is covered by a dome enclosed in a thirteen-sided polygonal lantern. The exterior has terracotta architectural and decorative motifs that give rhythm to the walls: on the sides of the nave, crossed by half-pilasters with grooved capitals and cherub heads, there are recesses containing niches with plaques and blind oculi, according to a vocabulary dear to De Fondulis, who used it in other works. The same treatment of the surfaces is on the sides of the polygonal apses: here, however, the windows give way to plaster panels decorated with rounds and lozenges. 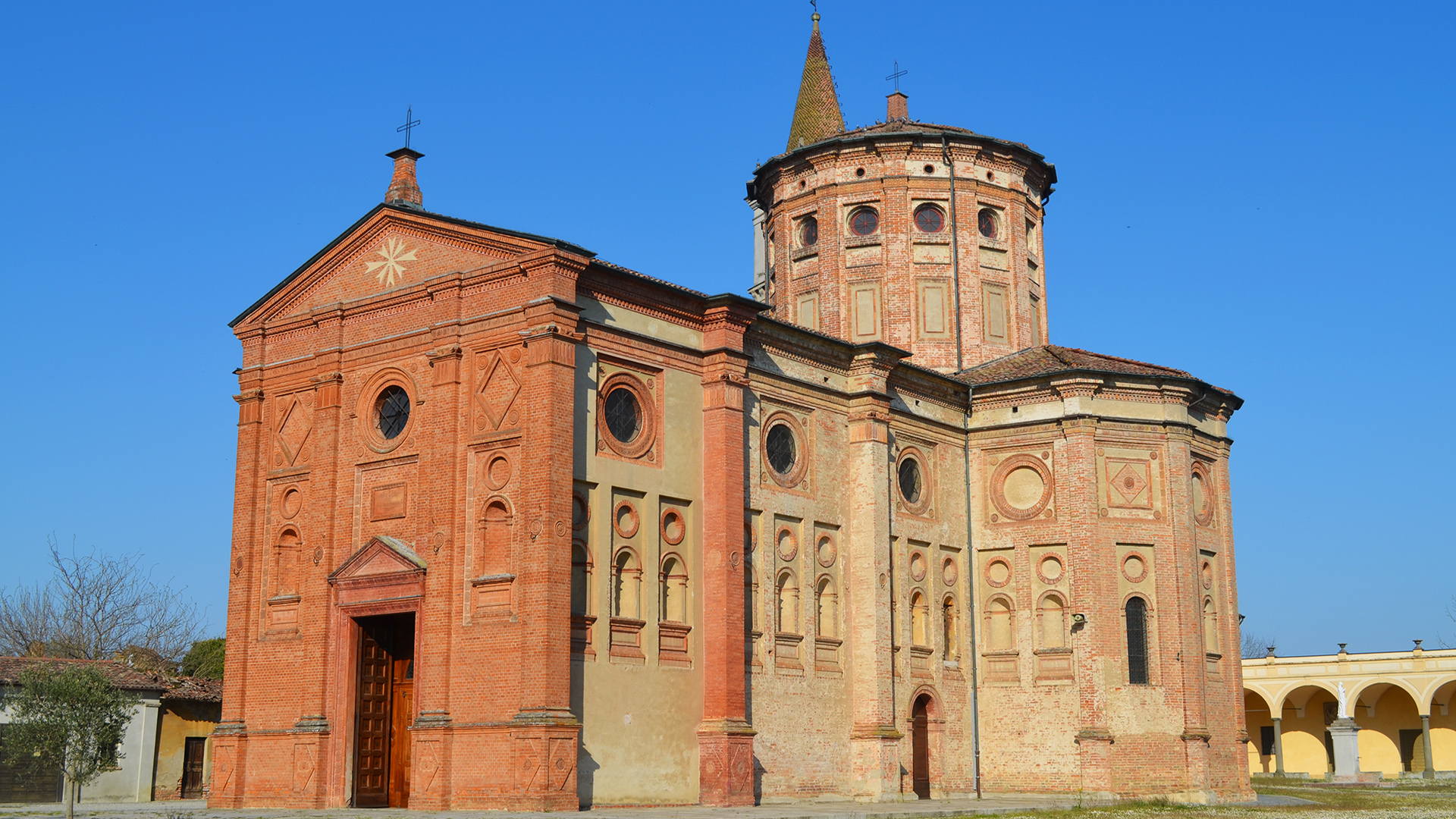 Even the slender tiburium, punctuated by pilasters, is pierced by oculi and enriched with panels. The facade, also in style, is the result of twentieth-century reconstructions, when the building was extended by a span to the west. Inside there are paintings in the niches of the drum depicting the twelve Apostles, probably the work of the Spanish painter Pedro Fernández (Murcia, about 1480 – after 1523) strongly influenced by Bartolomeo Suardi known as Bramantino (Bergamo, about 1465 – Milan, 1530). 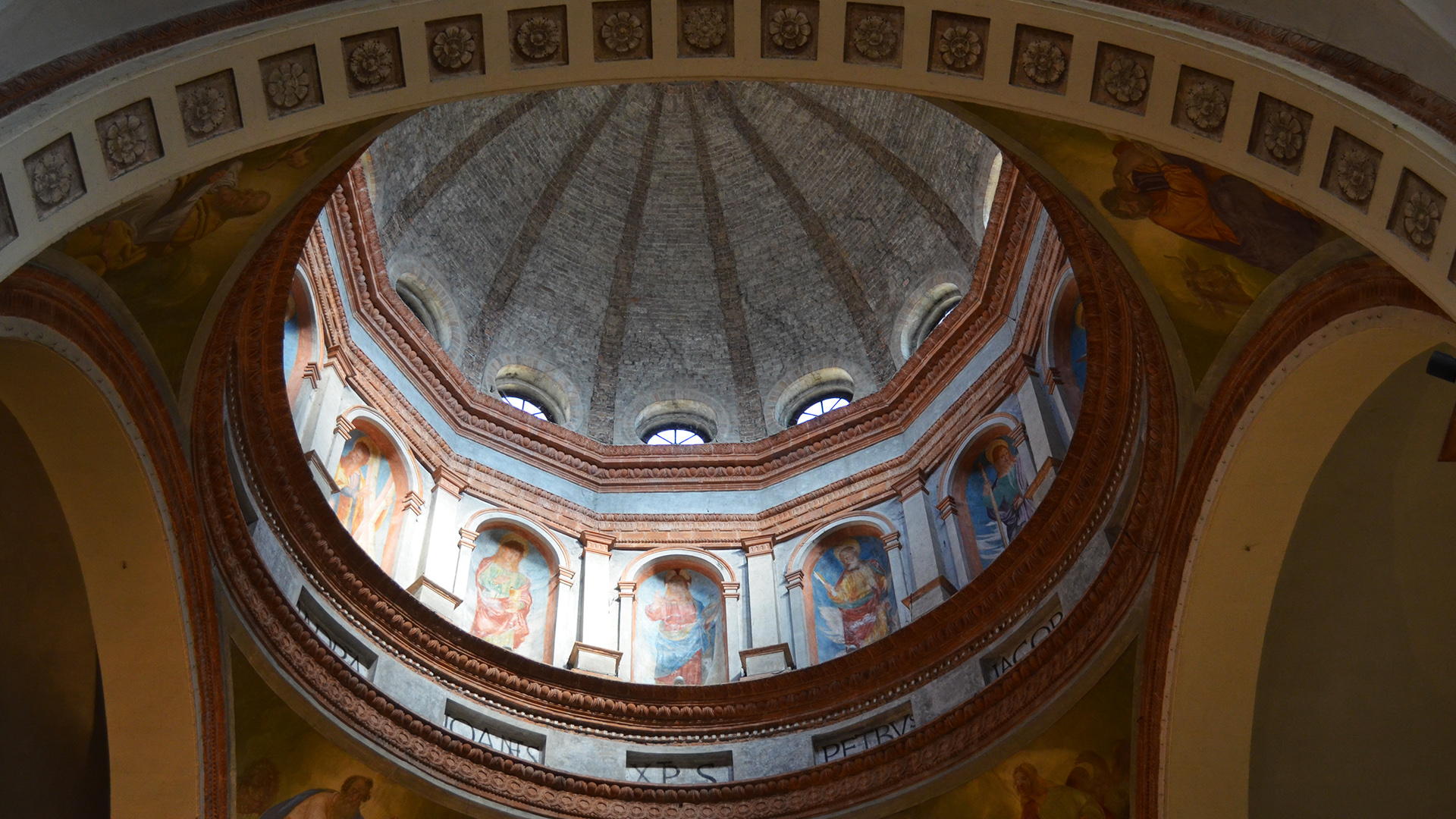 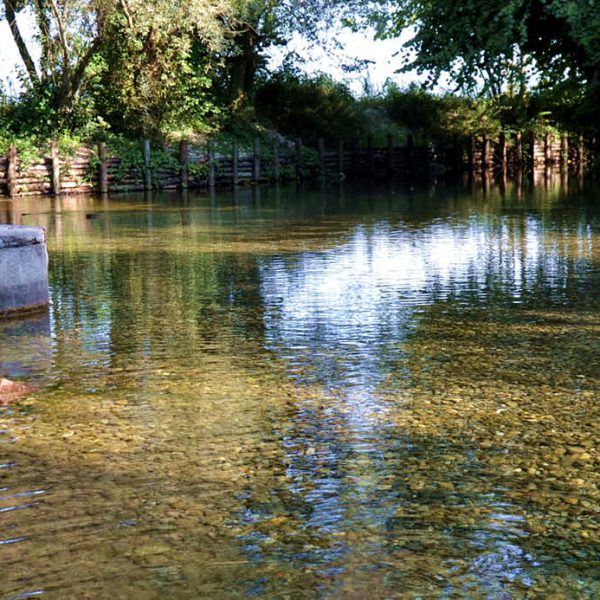