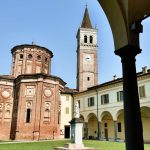 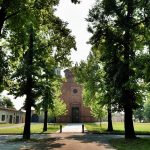 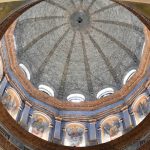 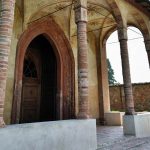 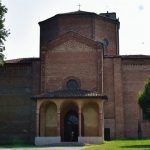 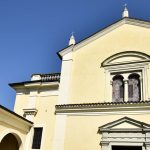 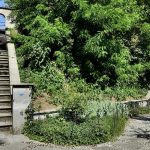 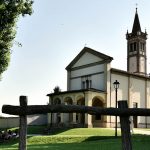 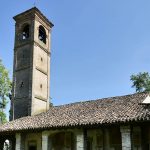 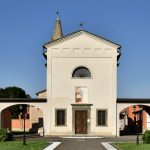 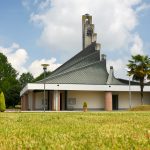 Wandering through the countryside around Crema, you can discover many churches and chapels dedicated to the worship of the Virgin Mary, real art treasures and testimonies of faith. We’ll take you through the territory adjacent to Crema, from Moscazzano to Castellone, passing through Marzale and on to Izano and Sergnano. This tour is also great for the more sporty tourist as it’s a fun itinerary to do by bike, but maybe spread over different days, depending on just how sporty you are! After reaching Moscazzano from Crema, just outside the village, you will see the Church of the Madonna dei Prati, (Madonna of the Meadows). The church is simple in appearance and is completely immersed in the green of the surrounding countryside in a place of absolute tranquillity.

According to tradition, once upon a time a statue of the Blessed Virgin was found on the banks of the river Adda , known as Madonna del Fango, (Madonna of the Mud), which was then placed where the church stands today. A small shrine was already present in the fifteenth century and documented in 1483. The image of the Madonna and Child currently on the altar dates back to this time. The building was later expanded for the growing cult of devotion. At the end of the sixteenth century evidence exists reporting that the church was not yet finished. The current appearance, with the addition of theporch, dates back to the late nineteenth century. Since 2009, the shrine has been dedicated to Maria Regina delle Famiglie, (Mary Queen of All Families). Inside, in addition to the aforementioned Madonna and Child, you can also admire a fresco by Eugenio Giuseppe Conti, (Crema, 1842 – Milan, 1909), above the high altar and another Madonna and Child of the late sixteenth century on the right wall. From Moscazzano we suggest you head to Castelleone, passing through Montodine on the way where you can visit two churches.

On the main road you will see the Church of Santa Maria della Misericordia built on the site of four apparitions of the Madonna, witnessed by a peasant, Domenica Zanenga, in 1511. In 1513 the construction of the building was begun following the designs of the architect

Agostino De Fondulis (Cream, c.1460 – 1521). The complex also includes a convent, built in 1619 by monks of the order of Saint Augustine. The church reflects the Renaissance culture of its designer, both in its architectural forms and in its terracotta decoration. The church is organized on a Latin cross plan that ends with three apses and the structure is surmounted externally by an octagonal lantern or ‘tiburio’, an external superstructure that covers the curved surface of the dome. Inside there are paintings in the niches representing the twelve Apostles, probably the work of the Spanish painter Pedro Fernández (Murcia, c. 1480-post 1523) strongly influenced by Bartolomeo Suardi known as Bramantino (Bergamo, c. 1530). From here, along a long, tree-lined avenue that crosses the village, just outside the town you can admire the beautiful Church of Santa Maria in Bressanoro. The events of this church are closely intertwined with those of the Milanese Sforza family, in fact it was Bianca Maria Sforza who commissioned its construction in 1461. It was about that time that the ducal court had received Amedeo Menez de Silva, a Potuguese Catholic convert, who thanks to the Sforza family, became a priest and obtained permission to build a complex to accommodate a small religious community. The site was chosen by the Duchess who used to go to Castelleone on holiday. The church has a Greek cross plan and the central part is dominated by an octagonal dome. The architect is not known, but a certain Filarete, (Florence, c.1400-Rome, 1469), was active at the Sforza court at the time. The exterior is richly decorated with terracotta friezes by the Cremonese sculptor Rinaldo de Stauris (documented from 1450 to 1494). On entering, you will be amazed by the fresco decorations of the late fifteenth century, which represent the life and passion of Christ. The statue of the Madonna and Child, present in the right arm of the cross within a glass case, is the work of the sculptor Sperandio Savelli (Mantua, about 1431-Venice, 1504). 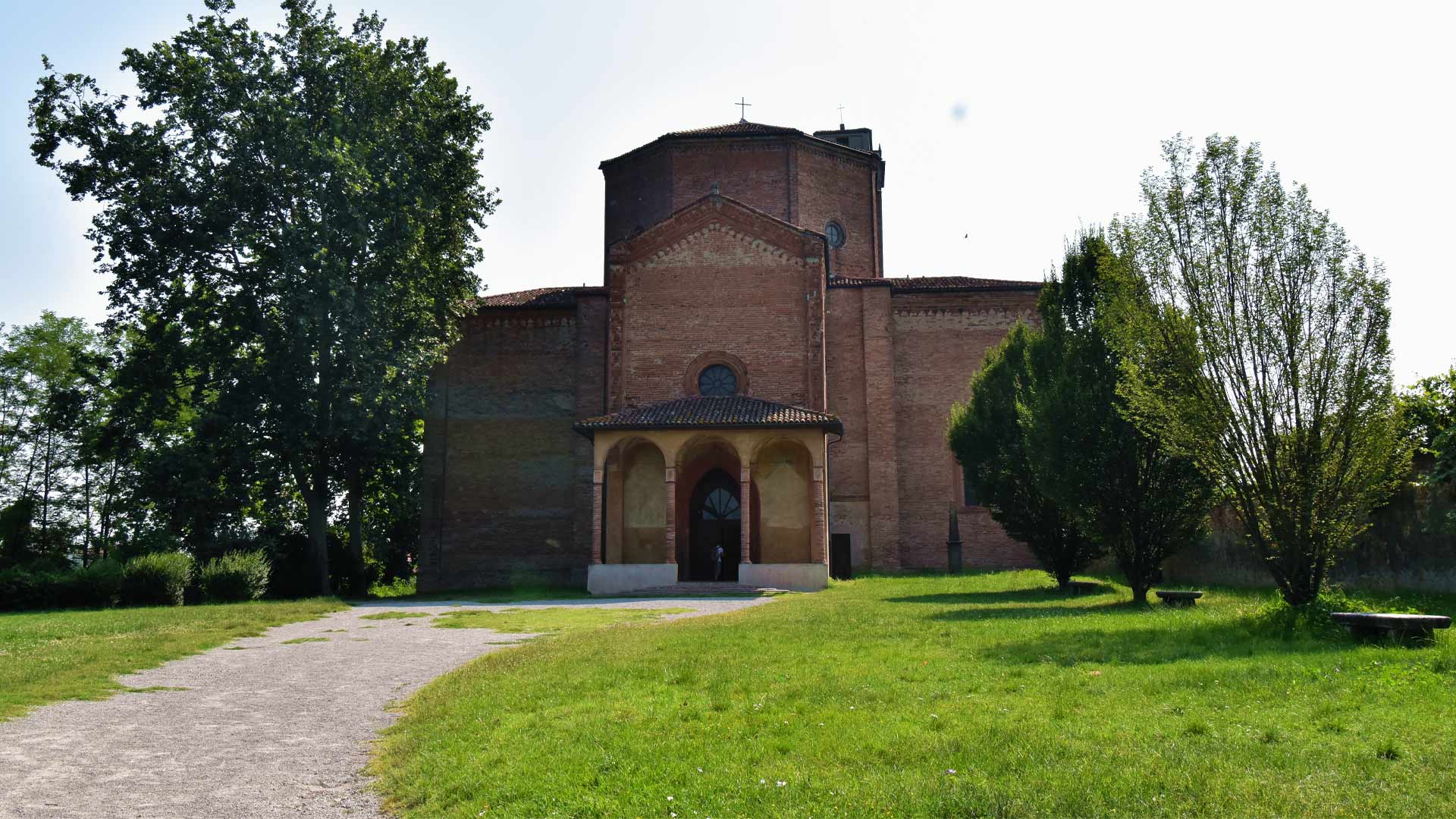 From Castelleone you take the road that leads to Ripalta Arpina and continue along the del Serio river until you reach Santa Maria del Marzale . The small chapel is located in the tranquillity of the Parco Naturale del Serio and is surrounded by trees. The oldest of the walls now visible dates back to the middle of the XIIth century. The chapel has a particular structure and substantially has no facade. It is surrounded on two sides by a portico. The external wall of the building is decorated with some stages of the Via Crucis, the images of the Madonna of Sorrows and Saint Francis by Tommaso Picenardi (XVIIIth century). The bell tower dates back to the fifteenth century. The interior has a single nave that ends in three chapels. The high altar is decorated with a Madonna del Latte (XVth century) moved in the Baroque period from a side chapel. On the north wall you can find some ex-voto frescoes dating back to the XIVth-XVth centuries. The southern wall is decorated with some painted panels dating back to 1580. The Scala Santa, or Holy Staircase descends towards the Serio Valley where there is a small shrine marking the spot where, according to legend, the apparition took place. The shrine is decorated with the Blessèd Virgin Maria with the shepherdess to whom she appeared. 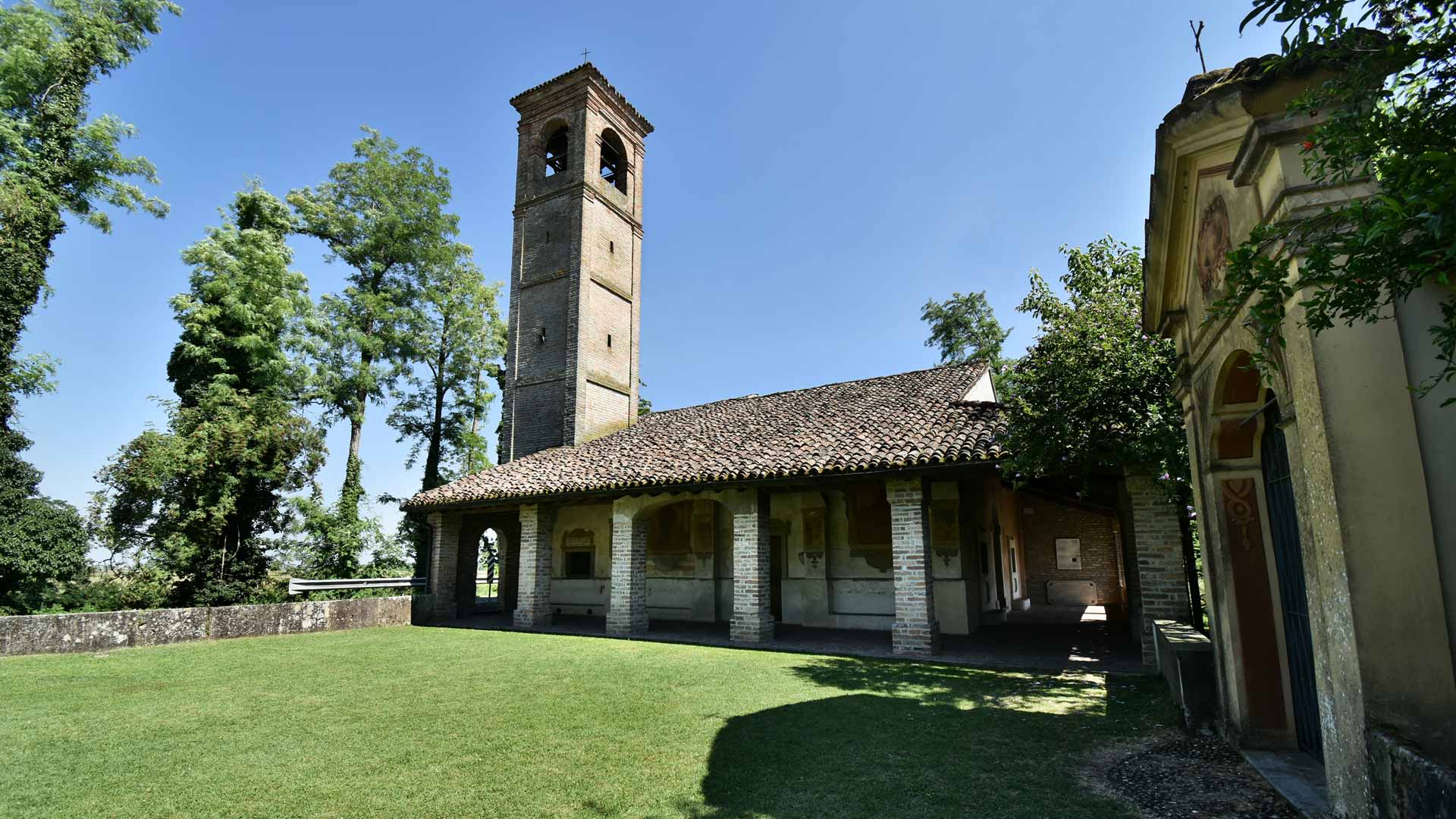 From here, we move on to Izano where, at the entrance of the village, you will find the Church of the Blessed Virgin of Pallavicina. According to tradition, on the evening of 13th May, the Virgin Mary appeared to a girl who was praying in an isolated place out in the

countryside and invited her to go to the parish priest to ask him to build a church on the site of the apparition. However, the priest didn’t believe her. So the following day on May 14th, the girl returned to the place of the apparition and received a dry branch from the Virgin to take to the parish priest. The branch then bloomed in her hands as proof of the apparition. The girl was told to return to her with written word from the priest promising to start the work. We don’t know when the first oratory was built or what it looked like. The current building was started around the middle of the sixteenth century to replace a previous building already in ruins.

The interior paintings also date back to this era. Later on in the XVIIth and XVIIIth centuries the chapels on the north side were added, while those to the south were built in the twentieth century. The first chapel on the left shows the stucco work of Giovan Battista Artari (Arogno,

1664-Cambridge?c.1730) and the canvas that depicts San Carlo in preghiera (Saint Charles in prayer), by Tommaso Pombioli (Crema, c.1579-1636). The other paintings with Episodi della vita di san Carlo (Episodes of the life of Saint Charles) belong to Giovanni Brunelli (Verona, c.1644-Crema,1722). In the next chapel, as well as the painting depicting the Madonna col Bambino (Madonna and Child) there are two other paintings by Pombioli, the Fuga in Egitto (Flight to Egypt) and the Adorazione dei pastori (Adoration of the shepherds). The apse has a complex fresco decoration dating back to the sixteenth century, which was attributed partly to the famous painter Aurelio Buso (Crema, c.1505-post 1582), and artists from his workshop, and partly to an as yet unidentified painter. The side chapels are richly decorated with stucco, gilts and Baroque frescoes. The route ends in Sergnano at the Church of the Beata Vergine del Binengo (Blessèd Virgin of Binengo) [link a pagina]. The first testimony of a building dates back to 1015. The church is linked to the legendary event of the discovery of a multicolored statue of the Madonna in the river, which you can still see preserved inside, but also to the apparition of the Virgin to a shepherdess. The structure, as it currently appears, is the result of works dating back to the XVIth century. The interior conserves a cycle of frescoes dating back to the end of the XVIth century and the beginning of the XVIIth century attributed to the Aurelio Buso school. The statue of the Madonna and Child is the work of the ‘Master of the Madonna of the Mouse’. He was an artist active between c.1460 and c.1500, but his personal identity remains unknown to this day. This strange title was attributed to him due to one of his sculptures now kept at the Bagatti Valsecchi Museum in Milan . 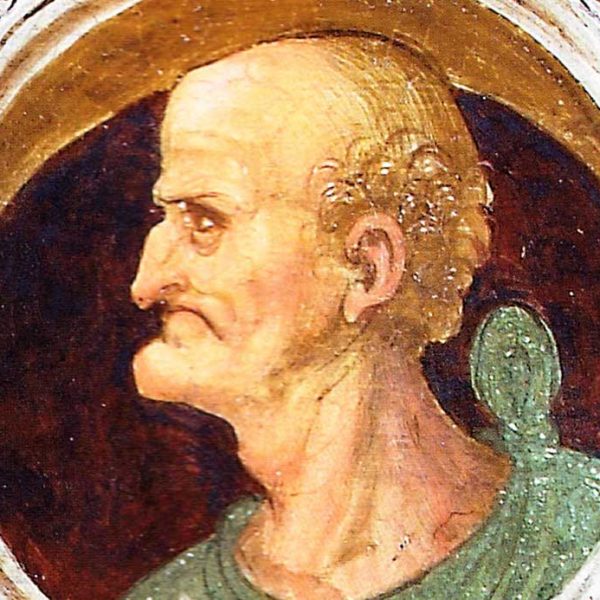 Da Vinci in the Country Side